Last Saturday was a very long day... We left Quebec City at 7:30 AM and came back at 0:15 AM the next day. Fortunately, the weather was extremely nice making this a fun summer ride.

The afternoon was spent visiting Exporail permanent exhibit (interior and exterior) and meeting people at the model trains event. It was my first time visiting this museum and, to be honest, also the first time ever I visited a railway-related museum with a substantial collection. It may sounds a little bit weird since I've been involved in this hobby for more than 25 years, but well, let's just say I rarely travel! On the other hand, visiting such an exhibit when you already know much more than the casual visitor changes your perspective and appreciation. By example, I was much more interested in paint schemes, Grand Trunk fonts and how piping is concealed on a real locomotive.

Here are my impressions on the Museum:

-Exporail interior exhibit is relatively large and extensive, ranging from late 19th century to first and second generation diesel. Steam locomotives range from small 4-4-0 to larger 2-10-2 behemoth, thus providing a good overview of most types and their evolution. Among the nice pieces are the British "Dominion of Canada" of same design as the record-breaking Mallard and a few other British and French locomotives. They provide a good comparison between North American and European practices.

-In term of rolling stock, there's a good provision for old wood passenger cars, many from Intercolonial and Canadian Pacific. The Intercolonial Pullman-style car is rather impressive for its interior furnitures. Nice upholstery, large windows carefully aligned with the seats, space for the legs and large central aisle, i.e., a stark constrast with the definition of "modern" comfort. At that moment, I had very serious doubts about the notion of progress! If you've ever travelled on a TGV or VIA Renaissance coach, you know exactly what I mean! LRC and stainless coachs are still king in my heart.

-The streetcar collection is rather extensive and covers most types in use from early horse-drawn carriage to later PCC-design cars. This is truly a must see.

-Safe access to steam locomotives and rolling stock provide a good vantage point to appreciate the numerous aspects of these equipments and their details. Steam locomotive cabs made a huge impression on children around me. I tried to imagine the conditions during a stormy winter night!

-The exterior exhibit provides an on-site streetcar line connecting the major attractions in an entertaining manner for both casual visitors and hardcore fans.

-Another very interesting feature is the operation of an early 19th century 2-2-2 steam locomotive replica named "John Molson" based on a 1848 engine serving the original St-Jean-La Prairie line. While a small locomotive, this replica makes a big impact with its polished brass and copper appliances and fashionable red wheels. I wasn't aware the replica would make an appearance and it was a nice surprise. And seriously, such shiny locomotives probably made a really big impact of people back then.

-The lighting inside the main pavillion isn't good. No specific lighting is provided to bring attention on certain specific collection item. It's a generic industrial warehouse lighting that provides a poor color rendition. I suspect this isn't a problem for most visitors, but if you want to take pictures it can be challenging and worse, the colors looks weird. Under such conditions, CN Orange is Peach while CP Action Red is Orange. But the weirdest effect is on Boxcar Red which looks like a brownish leather color. Quite weird!

-Many artefacts outside aren't exactly in great shape and suffer from various level oof weathering. I'm well aware many museums have the same money and space issues preventing them to protect a part of the collection under a roof. You can't really do nothing against it, but I feel the path and access to the outside collection should provide a better access to walk around the cars and locomotives.

With all that said, I consider Exporail is well-worth a visit. During my presence, there was a lot of young families and without surprise, kids were hugely impressed by steam locomotives. Is that a surprise?

It was also a good occasion to take good photographs of Grand Trunk lettering. I'll have to correct my artwork for my GTR kitbash project.

A Great Passion For Model Trains

As you know, the main reason I visited Exporail was to take part to the special event about model trains. It was a general public display, meaning many layouts and exhibits were geared toward families and kids. A good variety was provided in term of locale, era and scale (British, North American), including a large LEGO trains featuring interesting rendition of real prototypes, including steam locomotives.

From the start, I'll be honest, I'm not a big fan of exhibition layouts because they venture in a "fantasyland" that doesn't connect well with my passion for this hobby. Nevertheless, it was well-received by the general public, which was the main goal of the event. Many HO switching layouts were displayed, both steam and diesel with a fair level of craftmanship.

While quite peculiar, the Drummond Railway Modellers Association (Association des modélistes ferroviaires de Drummondville) layout was interesting. I particularly appreciated their mix of mainline and switching actions which provided subjects for discussion. I gladly put a few of my custom-built cars in action. Without surprise, the CN Transcona Woodchip Gondola fuelled a lot of interest.

By the way, my camera is in real bad shape and very little pictures are good enough to publish here, which is a shame. Unfortunately (or fortunately), only the S Scale Workshop layout were salvageable in some way. The poor lighting environment made things even worst.


I have to be honest, the S Scale Workshop did steal the show and it's an opinion shared by many people at the exhibition. I've seen countless pictures and videos of their work, but seing it in real is totally another thing (and no, my pictures don't do justice to their work). First of all, the level of craftmanship is high, very high... British modellers raised the bar high in term of portable layouts, but the SSW layout isn't far behind.

It must be said: Simon Parent's locomotives are out of this world. I've never seen such great steam locomotives in action. His pair of CNR 2-10-2 is impressive. At eye level and in action, that's the real thing. No compromise and the S scale is perfect to appreciate all the efforts he puts in his models. I unfortunately didn't had the occasion to congratulate him, but many visitors were stuck like glue to his models.

Simon's modules featuring a "Dunham" Canadian Northern station are worth mentionning too. A combination of precise modelling and honest simplicity makes it an instant attention grabber. It enhances automatically the trains and no wonder his modules were the favourite spots of photographs. 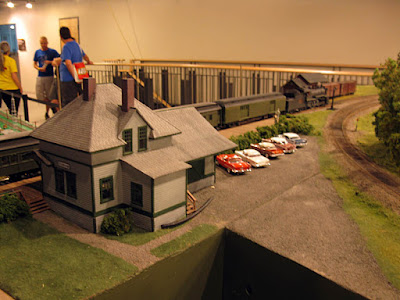 Trevor Marshall's Judge Farm modules which he refered to as the "Meadows" is an exervice in simplicity. He only modelled a single track mainline crossing agricultural lands. Imagine about 20 feet of fenced right of way with attractive and realistic vegetation, sound boring isn't it? Well, in fact, it's the most suitable backdrop to appreciate fully a train and Simon's 2-10-2s pulling a coal drag in that late summer environment made a huge impression on me. I envisionned to "sacrifice" a few feets in such fashion on my next layout and now know it's the way to go. Once again, let me say it: Less is More... or rather: Do Less, Do Better.

Switching opportunities were provided by another set of modules depicting an icing platform, a small brewery and an oil dealer. The brewery module is the work of Andy Mallette and was an excellent rendition of small town industries in the late steam era.


It was my first time witnessing S scale and it was also the case with many other Quebec modellers. This is a fascinating scale. Many of us who kitbash extensively were quick to see the crushing advantage of that scale. Later during the supper, Rémi Gagnon, a talented modeller, bluntly told us it gave him the urge to sell all his HO scale stuff and start again. Sure he won't do it, but he wasn't alone aound the table to think the same.


When Trevor asked me what were my first impressions about the scale, my sole answer was "better than I ever thought".

In my find, S Scale has two big selling points:

-It has a lot of presence without being much larger than HO. In fact, it's the perfect scale because you can appreciate details at a decent distance.

-The track work is simply awesome because it looks like the real thing: rail height VS ties.

Add to this the fact it tracks better, detailing models is easier and stuffing decoder and keep alive in a locomotive is a bliss and you got a winning formula. To be honest, Simon Parent is amazing, but I'm not sure we would fully appreciate his hard work if he worked in HO. The 1/64 scale really enable him to go full throttle when building a locomotive from scratch.


It seems I've known Trevor Marshall for years while I only met the man yesterday .I was pleased to find he was the fine gentleman I thought he was, very generous with his time. We had a nice long chat about layout design musing, future layout ideas, managing hobby time and real life obligations and, indeed, S scale!


Particularly, we discussed the limitations of layouts designed around a agricultural/isolated terminal (which is of prime interest since I have big inclinations to build a Temiscouata-themed layout). While they provide realistic track plans, interesting action and a sense of purpose, they are plagued by their lack of variety. By example, Port Rowan will always be a line serving small feedmills and coal/oil dealers. Hedley-Junction is nothing more than a line serving a paper mill, a rundown cotton mill and a cement plant. Except for a local work train, you can't expect a lot of variety from through train.

The problem is most modellers want to build a large array of interesting prototypes but can't hardly justify their presence on a layout. The generic answer to this is problem is the dreaded "I Want It All" approach which leads ultimely to failure. However, both Trevor and me think setting a layout as a single town on a connecting mainline with both staging at each end is better. You retain the local switching opportunities and achieveable nature of a small layout, but you gain the variety of mainline traffic. If both staging areas are merged together, you get a continuous run that can be useful to stage some type of traffic.

As Trevor explained, Jim Dufour's Cheshire Branch works on this very premise: small localities depicted, but linked by a shared staging yard. I firmly believe this is an elegant way to tackle the problem without overreaching. As you have seen with my Thinking Out Loud series, most scenerios I visited implied such a modus operandi.

I still have a lot of time before building my personnal layout, but definitely, if I ever decide on modelling a QRL&PCo-themed layout, I will probably gave a serious thought about S Scale for obvious reasons.. In fact, the seed is already planted and I already tried to design a few scenes. Will I give a try? Maybe! At least, S scale would be the best answer to run a layout which use very small and light locomotives. In HO, it will be a royal pain to make it feasible.
Posted by Matthieu Lachance at 7:35 PM

Email ThisBlogThis!Share to TwitterShare to FacebookShare to Pinterest
Labels: Thoughts about Model Railroading