I often recall on this blog my fondness of my older 4' x 4' and 4' x 5' twice around layout of my younger days. Sure they were crude and unrealistic, but they provided a foundation upon which a long lasting passion for model trains emerged.

I can say confidently that each year, I goes back and try to design something around the same lines and constraining myself to a maximum footprint of 4' x 6' to keep in touch with the originals. The goal isn't to create a prototypically correct layout, but rather to see if a decent design could emerge from such a diminutive set of rules.

So once again, for the sake of good old fun, I'm back to the drawing board. But this time, I'm applying lessons learned over years to develop a track plan that could genuinely be interesting for folks liking the old spaghetti bowl island kind of layout, which, I must admit, has some whimsical charm to it.

For this track plan, I set myself a few goals to make sure it could hold someone's interest while providing enough action to sustain somewhat realistic operations. I based that on my experience as a kind, asking myself what I loved on the old layout and what I dearly hated. All that was merged with a few design ideas from a track plan found on the internet but no longer available. I wish I could have credited the designer. I think it was called "James River & [something]". 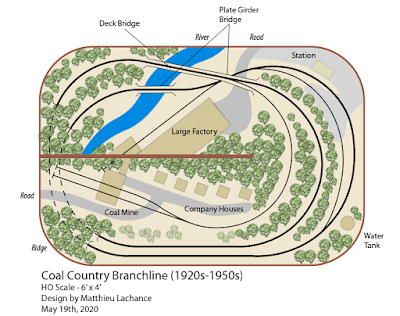 As a kid and a teenager, I enjoyed the possibility to see my train run under then over a nice bridge. This is a classic railfanning spot and no wonder it creates some magic on a layout. Another nice thing I liked was a small siding which provided a basic interchange where cars could be switched. However, our siding wasn't located in the right place and was to near to a steep grade. Later, another version of this layout addressed the problem by providing a runaround track and a siding in the flat area, making life much easier.

One big pitfall of my old layout was that reversing a train was impossible and you could see where it came from when looking at the other side. Not very convincing if you ask me!


So, I decided to see what could be done with a bridge, a runaround, a siding and maybe a small industrial spur. I was surprised. Yes, it's a spaghetti bowl, but I feel it could work wonders for someone liking this kind of stuff.

Basically, on the bottom level, a runaround and a station are there to create a place where cars can be put in interchange and trains reversed. The track then continue under a large bridge and crosses a small river powering an old brick factory with a small siding. Then the main line disappear in a wooden area and in a tunnel where it starts its ascension toward the upper level. There, a rock cut in the mountain provides the space for a small industrial spur to reach a mine. Then our main line crosses the large bridge and disappears again in another tunnel before going down again back to the station.

Both industries can't be switched in the same direction so the operator must used the runaround at the station. It also means ones can staged to different trains, one in each direction. As for the mine spur, the train can switch all the cars, or more interestingly simply pull out the loads and set out empties on the off spot track. A small industrial locomotive from the mining company could take care of switching the cars between the tracks at the plant as would have been usual back in the days. The spur length would act as a yard lead long enough to not foul the main line.

While this layout design isn't the best thing since slice bread, it still has potential to represent a decent mountain, valley or coal railway. I can easily imagine such a layout being set in the Appalachian area, maybe in Pennsylvania or West Virginia. I kept the turnout count quite low and only planned a limited number of relevant structures. More than that would be too much and the visual balance would crumble.


For motive power, small locomotives such as early diesel switchers for road power and a GE 45-ton for the mine would be more than enough. Set in the steam era, I would elect to use Bachmann excellent modern 4-4-0, Alco 2-6-0  or even a mighthy 2-8-0. These are sturdy and quality locomotives that look good on sharp radius curves and can be purchased at very decent price. They also provide an excellent base for kitbashing and superdetailing. Bachmann 0-6-0T would be my locomotive of choice for the mine. As for rolling stock, I would keep it small. Nothing over 40ft. And honestly, I think setting the layout in the 1920s or older would be a safe bet since 36ft cars and small 55-ton hoppers would be the norm. With Accurail providing decent shake-the-box kits at good prices, I feel this would make for a neat layout that can act as an introduction for a kid, a teenager or a young adult. Not eveybody is into prototypical operation on a shelf layout.

Also, there is a lot of scenic potential with such a layout and if someone use the topography in a realistic manner instead of the usual cartoonish Woodland Scenics festival of tunnels and rock faces, it could be compelling and provide many photographic opportunities.

All in all, it was a nice little exercise in design, trying to incorporate lessons learned from more prototypical layouts and trying to make a compelling piece of work. I've often found 4' x 6' layouts in particular to be a joke, full of ludicrous and impractical devices. You don't need them to have a sophisticated small island layout. And honestly, if my small childhood pike had been like this one, I feel my crave for freight operation would have been satisfied.

One thing is sure, there is a place for that kind of layout and approach in our hobby. Many started that way, many even in their older days love that peculiar aesthetic. I personally believe that when done with the right mindset and based on well-thought operation-oriented elements, they can provide a relevant way to perfect your skills. And anybody with a basic artistic sense and an eye for scene composition can minimize the unrealistic aspect of a twice around design!

Don't panic! I'll be back soon to more "serious" endeavours!
Posted by Matthieu Lachance at 9:43 PM