The First Idea Is The Good One


As we move forward toward completing Charlevoix trackage while reshaping the peninsula, the time has come to confront some initial concepts with reality. Yes, scene composition is one of the most tricky thing out there. Most of the time, we think a 100% faithful to the original prototype scene will is the best way to get 100% of the locale flavour. So false! In that respect, browsing through Troels Kirk's amazing On3 Coast Line RailRoad layout was a real eye opener. What he does is heavily proto-freelanced, many things would make the most discerning modeller suspicious and still, the results is amazing because extra care is taken to insure scene composition is coherent.

The funny thing is that a year and half ago, it was redefining the exact same area that sparked the brought idea to model more faithfully Murray Bay Subdivision, which I consider was an excellent move forward in term of quality and coherence, but also from an operation standpoint. I’m always surprised to see Jérôme operate the layout at every meeting. He will build a train at Donohue then work on the layout or repair some cars and locomotives. Later, he come back to the layout and switches a few industries. That speaks for itself, the layout concept works fine and FITS our needs.

The idea to model Murray Bay Sub came as I was building a generic industry mock up in a corner. A few minutes later, the heteroclite parts and buildings came out as a coherent and visually interesting  turn-of-the-century industrial complex reminiscent of Dominion Textile plant at Montmorency Falls.
As the layout design progress, I decided to reproduce the plant more faithfully. With pictures and old maps, I recreated a more prototypical plant. To be exact, I ended up with a very long plain brick wall along the wall. No more was the fancy L-shaped original fantasy factory that initiated the idea. But as the concept was closer to the prototype, it was becoming drab and without personality. To be honest, nobody who have visual memories of that iconic plant could recognize the model prototype!

In fact, Dominion Textile was known for its particular architectural features that put it apart from other similar complex. All those features could only be seen from the roadside, not the track side. It included highly decorative Italianate staircases, many elevator towers, a detached office building, small clapboard directors’ houses and a huge boiler house.

My original idea had all those features, making it an instantly recognizable building even if quite far from the geographic reality. The new concept lacks every one of them! Worst, the relation with the topographic landscape is clumsy and unbelievable. I prefer my original concept idea which structured coherent topographic transitions from mountains and the powerhouse ruins blending with the mill and merging into the plain until reaching the passenger station hiding the tunnel behind the furnace.

Also, by building a long building with many car spots, I was under the impression it would give more operation opportunities. In fact, it doesn’t. To be honest, Dominion Textile was on the verge of dying by 1985. Only raw materials came from the rail, all finished goods were trucked. Rail traffic was regular, but not very high. It means, only the cotton warehouse is required on the layout.

So here I am being puzzled how an unprototypical mockup is closer to reality than a servile exact copy! I remember when Trevor Marshall gave some thoughts about rethinkingis St. Williams scene to be closer to the real thing. Sure, the prototype has some very interesting features, but as Trevor explained, it would be hard to reproduce it at full scale. His actual setting is quite creative, but it is coherent, works well and have all the characteristic features needed to make it a believable part of Port Rowan area. I come to the same conclusion with Dominion Textile. The best concept is far from reality, but it is the one that creates the most believable scenic vignette for the layout. When you analyse my first concept, you find out only 1/6th of the structure is modelled. But the scene composition makes you believe there's much more behind the facades than seen from the track. 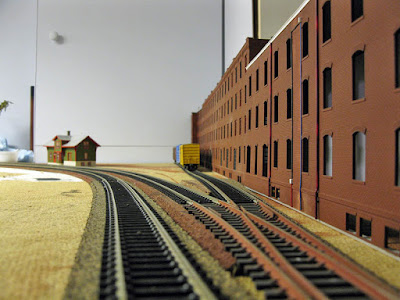 I prefer an incorrect scene that screams M-O-N-T-M-O-R-E-N-C-Y than a correct generic and boring scene. Also, as you can see, the “incorrect” concept better uses the ingrate benchwork shape and creates a realistic illusion of depth. Flat structures on walsl will always have serious limitations, mainly their inaptitude to compose scenes with depth.

Lesson of the day? I should have listened to my late maternal grandmother’s favourite saying: “The first idea is always the good one.”
Posted by Matthieu Lachance at 8:21 AM