Yesterday, I condensed the old CN track plan, station table and old CFC footnotes together to make a concise and useful document for operating crew. This is only a mock up, but I feel this could be the backbone of our paperwork. Later, I'd like to add a  timetable to complete the information available. 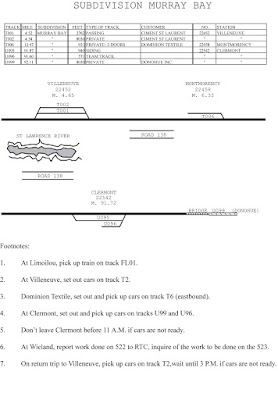 Meanwhile, a comment made by Roger Sekera on my previous provided me with a new way to handle switchlist and car traffic. Roger brought to my attention what Mat Thompson did to control switching moves at some of his largest plants, particularly a large Swift meat packing. Mat write down instructions to railway crew as if he was the plant manager. Thus, he can pe very precise about the work to do while making paperwork a little bit more relaxed while keeping things prototypical. The instructions are placed in a "mail box" which crews pick up and read before doing the work.

To be honest, I've heard similar stories from various railroader. But I must admit I like the way Mat integrate the role of plant manager into the operating scheme. I find it brilliant, simple and efficient to implement. It also has the advantage to put a real face on your industries. They are no longer tracks to switch, but a customer to serve.

During the recent operating sessions on the layout, Jérôme intuitively ask me about Donohue's wereabout before doing the switching chores. He generally inquires about which cars are ready to leave and which ones need respotting. While I think waybills are a nice way to handle traffic, at some point, they are a little bit overkill for our layout. Our time at the layout club is scarce and I can't afford to take hours staging the industries and their paperwork. At best, I can make a switchlist and give specific instructions on the spot as a de facto plant manager.

It's funny, because I always thought I was just a railfan watching others operate, but I'm starting to believe I play a role in operation that is just too often overlooke: plant manager. Do I like it? Yes, a lot. On the track plan I've just published, you can see the layout is rather simplistic for a 18' x 30' HO "empire".

This simplicity allows for a lot of hidden versatility because setting up an operating session is a matter of a few minutes and can be done between building sprees! With that mindset, I think I’ll probably implement Mat Thompson’s mail boxes on the layout, particularly in Donohue and Dominion Textile. Even though I’m a proponent of realistic operations, the recent documentations found about Murray Bay Subdivision draw a picture of a railway working at its own pace. Will I ever implement the waybill system I started to write down? Maybe, but probably not yet.

By the way, I've just received the Boulder Creek electronic weighing station. I was surprised by the amount of build-in options. The price was quite steep with the failing Canadian dollar, but seems it will be worth the expense. We should install it this evening.
Posted by Matthieu Lachance at 8:55 AM