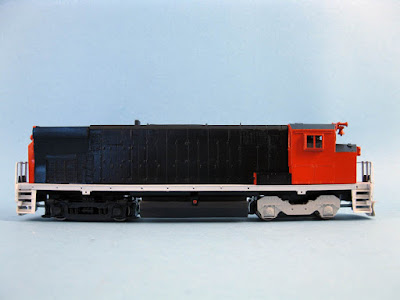 Another day of work on my poor man's M420. I was happy to find out this morning I still had a set of old Atlas C424 stanchions that fits the M420. I was contemplating making my own with brass, but honestly, I prefer to reuse unmodified delrin parts for the sake of durability.

While I thought I was ready for the paint shop, I decided to make some more modifications to the pilots, particularly the rear one. M420 had a notch under the coupler's box. C424 don't and have an angular pilot shaped like a wedge (or a diminutive snow plow). I'm aware this model is the most unprototypical M420 out there, but locomotives ends must be as close as possible because it's where our eyes are drawn during operation. 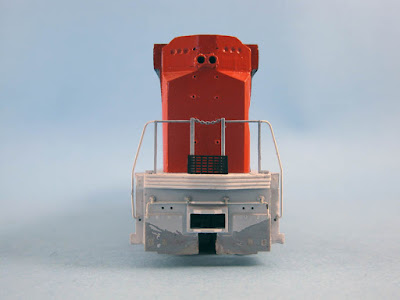 I also painted and glossed the shell. If everything goes as I wish, decalling could be done later this week. Reaching this step is a big incensitive to work hard to reach the goal. That and the wonderful model of a Kaslo shell built and painted by Sean Seale. Once again Efram did a terrific job on the weathering. The nice thing is that the level of weathering match my distant memories of a M420 stalled at Château-Richer's grade crossing back in 1986. As you may know, I'm trying to replicate that specific locomotive etched in my brain. You never forget when the train bug bites for the first time... 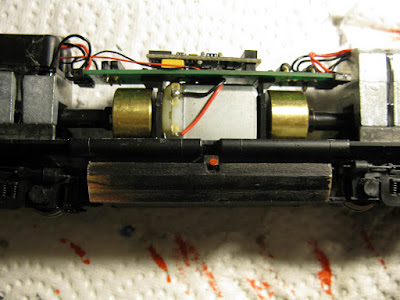 Back on the model! While the paint dried, I decided to install my custom wood fuel tanks on Atlas snap-on tank part. It was easy as 1-2-3. Using a Dremel cutoff wheel, I sanded down the wood ends until they matched the Atlas tank. For some reason, my tanks were very long and didn't clear the locomotive trucks. Put that on my less than stellar craftmanship back in high school. 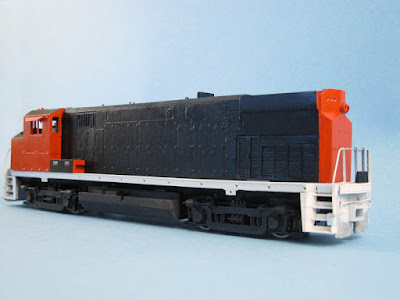 Small Atlas air tanks were saved and glued back on the frame but with a different spacing according to the fuel tank. It must be noted M420 and C424 have different proportions. Back in the days, I used to think differences were mainly in grills locations and stylistic, but I was wrong. It means the fuel tanks of my model are quite short when compared to the real M420. However, one must know many M420 did have shortened fuel tanks. That specific M420 version ran over Murray Bay Subdivision because less fuel meant they were lighter than regular ones which were forbidden according to old timetables. 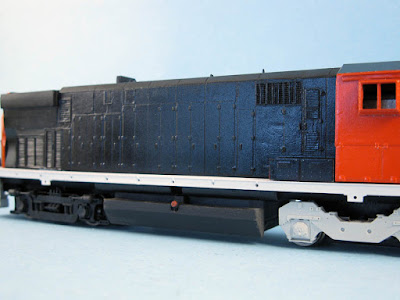 Finally, I started to prep Kaslo Shop resin ZWT trucks. They are finely molded and easy to clean up. I'm actually working on a prototype to see how to mount them on the locomotive. The easiest and most efficient way is described on Diesel Detailer forum by Éric. He's done a great job in engineering a clever solution to that problem. My first try isn't perfect, but I'm getting a grasp of it and think the next three trucks should be quite easier to make. 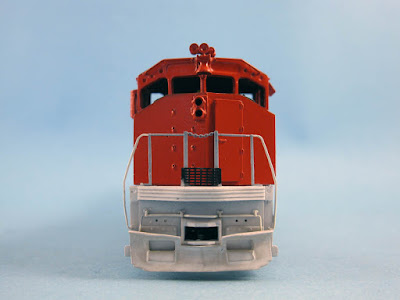 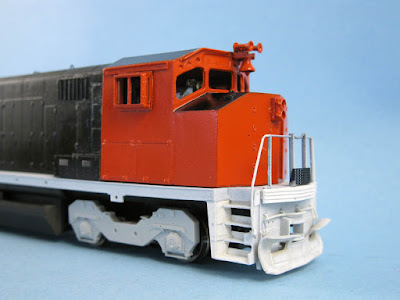 Posted by Matthieu Lachance at 11:49 AM