Well, this project has sat on my shelves for a while and I'm convinced I can now complete it.

As previously said, bear in mind this project is a total fabrication about a M420. It share the general appearance, but if you start to be picky about details, you'll be greatly unimpressed. 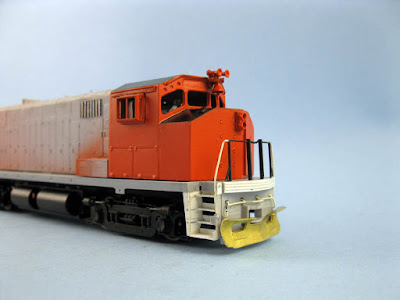 The biggest problem I faced when I bashed my first version was modifying the frame and pilots. At that time, I only used CA glue and it looked like an unsolvable issue. Nowadays, things have changed and I was able to resolve it in less than a morning. 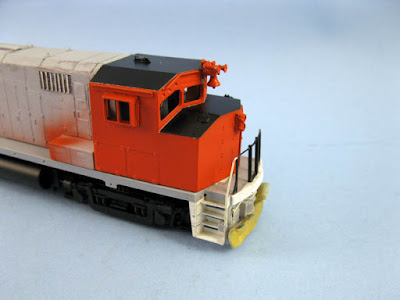 Sure I took shortcuts. I decided to keep the pilots as is and work with Atlas C424 front handrails. But I did venture as far as rebuilt the entire steps from scratch. It was much more easy than I thought. To be honest, the steps are a little bit wider than the real prototype, but don't forget I'm working with a C424 frame and shell. While similar, there's many discrepancies. 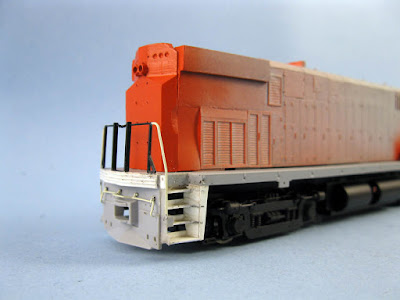 Finally, a few bits of styrene where used to make large triangular anticlimbers similar to the prototype. In this respect, I must admit working with prototype pictures was a big help since plans published in RMC back in 1974 we different that was I could see.

A Detail West snow plow complete the model which will soon be ready to be painted and lettered. The biggest challenge is now to make new brass handrails but that will be another day and I still can paint the model without them.
Posted by Matthieu Lachance at 4:20 PM