If you're wondering with my last post had "M420" in its title, here's the answer.

During our last open house, Jean-François Boudreau kindly brought one of his most interesting locomotives: a Kaslo Shop CN M420 with an Atlas frame and Tsunami sound. 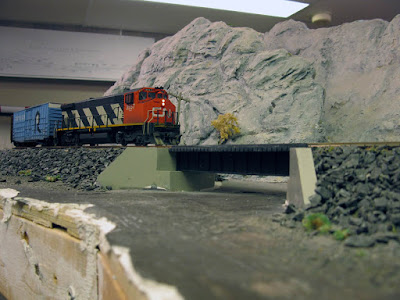 When he offered us to operate it on the layout, we gladly accepted and the M420 pulled the train back to D'Estimauville.

The home trip was quite long since we made him stop the train in many location to take a few good shot of it. It was a good occasion to recall memories from this now lost era when CN operated the line. 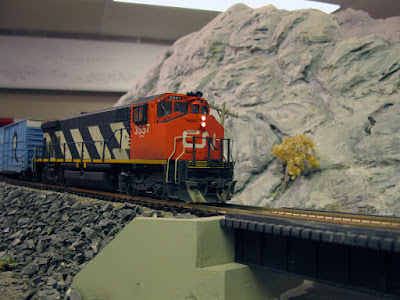 Among our guests were many younger railfans in their late teens and early twenties. Some of them never saw a freight train over the Murray Sub and none ever saw it under CN tenure. However, they were eager to know more about that prototype they've heard from older railfans. It's crazy how such a backwood subdivision still have an impact upon the collective memory of younger ones. The time when the line attracted American railfans in the 1940s-1950s and when Omer Lavallée wrote articles about it is long gone... 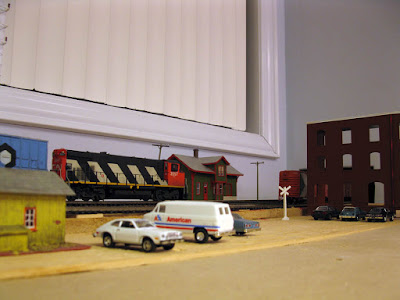 I had a lot of fun to answer they numerous questions and they delved into my childhood memories as if it was something that happened in some fabulous era. Gosh! It just the mid-80s/early 90s, that's yesterday! 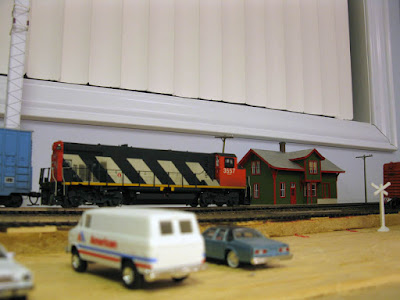 They were quite surprised to hear that 4 to 6 trains per day travelled the line, that motive power was often made up of three M420, that train were regurlarly from 60 to 80 cars and that 100-car consist weren't unheard of. I told them about the snow plow operation, CN employes in the caboose and special commodities handled over the line. 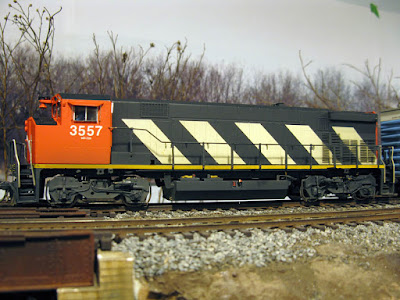 It was also a good way to introduce them to an era when Quebec City still had large industries like Ciment St-Laurent and Dominion Textile, both gone at the time of their birth. In return, they talked about their hope to see this railway line get a new life in the future.

With that open house, I just discovered another aspect of modelling a real prototype. You're not only recreating your own memories, but you pass down history to the next  generation.

Posted by Matthieu Lachance at 7:05 PM