A few days after the open house, a visitor sent us old Murray Bay Subdivision documents: a 1984 timetable, a 1988 track plan with customers and a 1994 timetable from Chemin de fer Charlevoix.

The track plan is particularly interesting because it shows every customers on the line and even list the number of car spots when this information is useful. I wish I could have seen this track plan before planning the layout. I took the liberty to retrace the track plans in Illustrator making sure to preserve the crappy late-80s graphic style. I was also able to merge the content on 2 pages instead of 8 sheets. Later, I'd like to make our layout track plan in similar fashion. 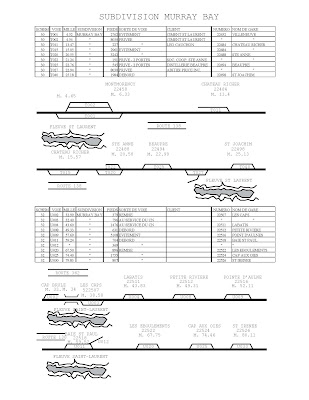 Among the information I've learned, I was quite surprised to see the two local farmer's cooperatives were still rail-served as late as 1988. Also, Beaupré Distillery was still in business though its days were counted.

An interesting switching district is Wieland between La Malbaie and Clermont. Two oil dealers still received their commodity by rail and a local propane dealer was also rail-served. There was also a team track used as an intermodal terminal and a storage track. 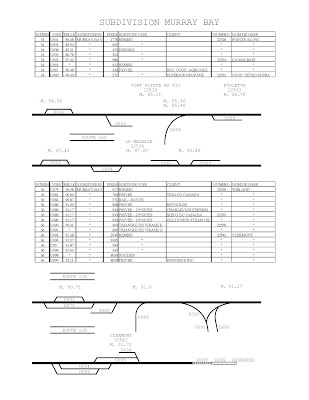 As you know, I'm still working on making Clermont more believeable. I've often hinted Wieland would be a suitable model for this area and I'm ready to explore this avenue.

One thing I would truly have loved to included on the layout would have been Léo Cauchon sawmill. This small industry was located in my hometown and was my first ever encounter with switching when I was about 4 years old. I admit it would be fun to have it, but it would be a mess in term of space and scenery.

Anyway, except the small traffic generated by small time customers, I feel our layout operating plan is quite representative of the real prototype. While getting access to first hand documentation would have been a neat thing during design, we must admit we still were able to piece together a coherent layout using our childhood memories, completely outdated timetables and heresays.
Posted by Matthieu Lachance at 1:13 PM