"...which I cannot behold" is a free interpretation of Molière's Tartuffe famous quotation! That's a fact, who wants his main line to punch the wall in such a brutal manner?

This picture show you the layout early stage in June 2010 with the first train to ever "run" on it. The hole at left leads to a hidden staging yard behind the furnace. 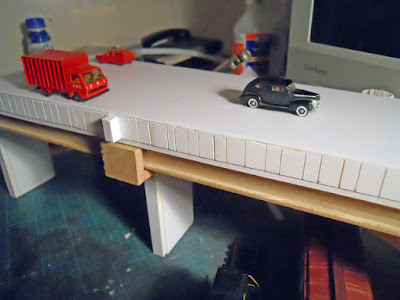 To conceal this horrible hole in the wall, I decided to go with the classic highway bridge hiding device. 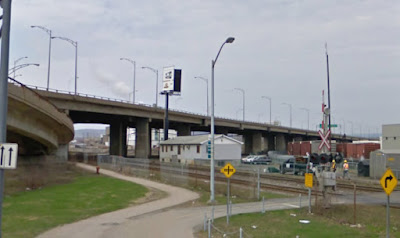 In the real life prototype, there's a surelevated highway south to the yard called the Dufferin-Montmorency Highway 440. The first track in the foreground is the VIA Rail mainline, the second track is the freigh track connecting to Bassin Louise and Bunge Grain Elevator. The grey building, CN yard office, was approximately built where Hedley Junction Station once stood. The original Murray Bay Subdivision electrified double mainline was located between the yard office and the string of boxcars. As you can see, highway concrete piers block the old right of way.


Hedley Junction is no more

When the real highway 440 was built in 1976, Hedley Junction was completely redesigned to make room for the new concrete structure. At the same time, Palace Station closed and all CPR tracks removed. Passenger traffic having being rerouted to Sainte-Foy since a few years. In fact, the junction, built with passenger service in mind was no more needed since 1959, when QRL&PCo St. Paul station (Quebec City) was closed and electric interurban service abandonned. 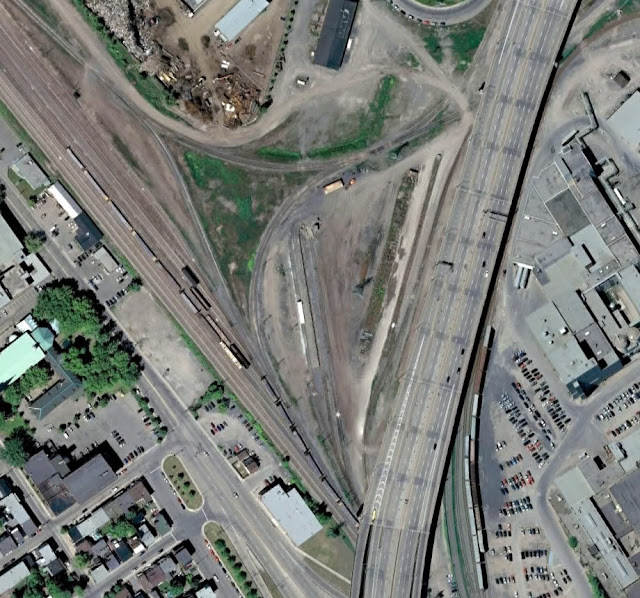 Some 2000 feet of Murray Bay Subdivision original mainline were expropriated to make place for the highway and the original Hedley Junction (bottom right, left to the boxcars) was replaced by a new wye connecting directly to Hedley yard. This new wye was also useful to get access to a new yard built along the new (top right) and to turn VIA Rail trains.

However, this new track layout causes issues for future passenger service on Murray Bay Subdivison because a passenger train would have to work its way around the S-curve created by the wye and worst, it would have to travel on the yard tracks to reach Palace Station. Securing rights to run on these few hundred feets of track would be costly at least... and probably impossible since interurban service would disrupts freight movement drastically in this busy part of Quebec City Harbour. For this reasons, the future scenic train to Charlevoix (and its predescessor "Le Tortillard du Saint-Laurent") will have to use d'Estimauville Avenue as terminus, more than 3 km north from Palace Station. 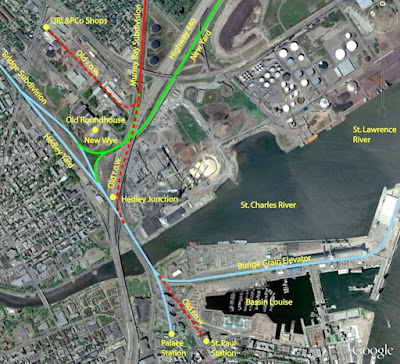 It wouldn't be false to say this highway - supposed to be an avatar of progress in the 1960's - killed the train and all future prospects due to short-sighted planning. This Dufferin-Montmorency highway is now regarded as an urban disaster that cut the old city in two halves, razed completely the Chinatown, drastically altered Palace Station and accelerated the decay of St. Roch ward, once a thriving business district. 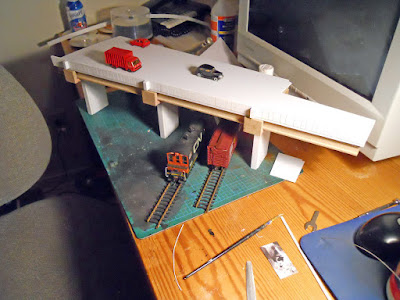 Since the layout is set in September 1957 and highway 440 was built in 1976, we get a 19 years gap to fill in! No heresy here, just working a little bit with history. In fact, highway 440 was planned in the late fifties and the first sections, 6 km west to Hedley Junction, were built in 1962. If we fudge things a little bit, we can say it was planned, built and completed for summer 1957. 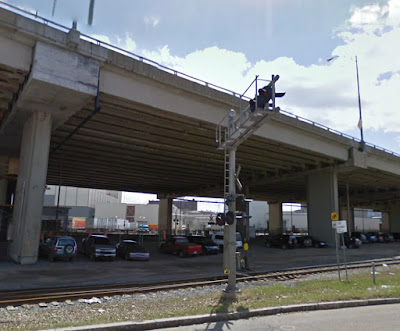 The model is based on the real prototype with overall dimensions calculated from Google Earth and Google Street View. 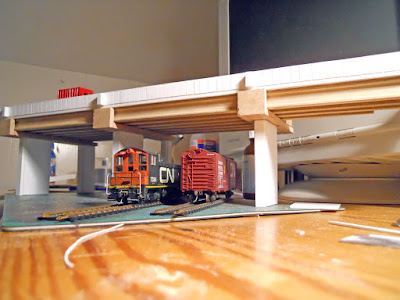 The deck, beams (stringers) and girders are made out out 1/4" MDF glued together. The side beam was shaped as a I-Beam on the table saw. All my respect for Louis-Marie for his madman woodworking skills! 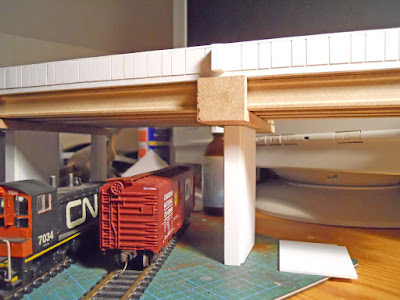 Piers, road and side walls are .5mm and 1.5mm sheet styrene. Guardrails will be made out of structural shapes (Plastruct). Street lights are to be made out of plastic sprues and bits from the junk box. I thought about using LED, but that would have involved using brass tubing. Since we operate in broad daylight, it will be easier too improve their appearance without the electrical stuff. 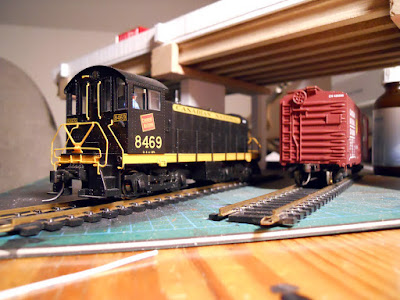 Looks like switcher 8469 is already working hard under the new highway completed this summer. I'm not sure the boys can clearly foresee their archenemy is slowly but surely crawling out from its filthy nest!
Posted by Matthieu Lachance at 8:56 PM No comments:

Presentation Of The Layout

A Bit of History


On the following years, an important yard named Limoilou grew north to the junction. On the northern side of this very yard, on Canardière Road, was former Q&LSJ passenger station known as Lairet Station. The wood building, converted in a restaurant then in a pawn shop, survived until summer 2007. In 1919, Quebec Bridge was inaugurated and the Transcontinental Railway (future CNR Bridge Subdivision) linked for the first time Quebec City to South Shore and New England's railway network, ending an economic isolation going back to 1856.

This layout replace the first club layout depicting the Bassin Louise (the harbour located on St. Charles River south shore) as it could be seen in the mid-50’s with its iconic Bunge Grain Elevator. It was completely torn down over the last months. 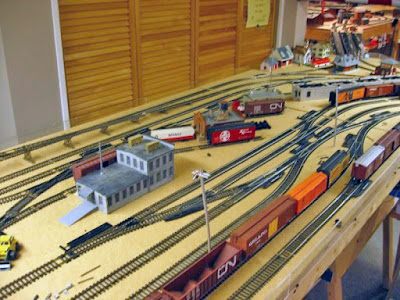 The original layout was U shaped with a swing bridge connecting both legs. First built in my grandfather’s basement; we moved it in one of our member’s own basement after humidity and temperature issues. However, the new room configuration wasn’t very forgiving and we had to knock down a drywall in the laundry room to maximize the space. Over 3 years, this layout quickly expanded in the adjacent room where Hedley yard and its roundhouse were first built. Finally, like a cancer in terminal phase, another extension spread into the garage through a 10 feet long amovible bridge. At this point, operation was at best an aimless nightmare. After many attempts to rationalize the trackage, we decided to start from scratch with a new shelf layout duplicating the possibilities around Hedley yard.


The actual shelf layout in HO scale is set in September 1957, according to an Underwriters Insurance plan issued that same month and year. Using different era-related rolling stock, it can easily be backdated to the 1930’s or operated until the early 1970's, since the area suffered from little changes during this era. Most of the buildings will be replicated full-size in styrene. 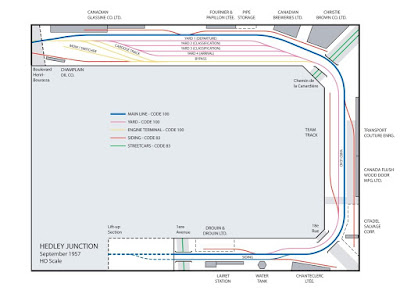 The new layout was completely designed according to the real prototype. As faithful as it can be with space available, it retains all the prototypical industrial trackage with a simplified version of the yard. We used Lance Mindheim’s design principles as a guideline and are largely indebted to him, even if he’s not aware of it! No wonder his work inspires many model railroaders all over North America and overseas. 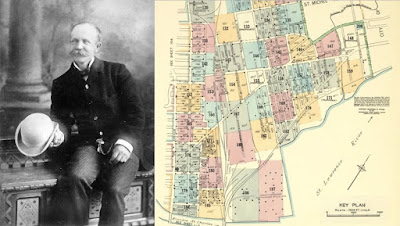 Originally located outside the old city limits, north to St. Charles River, Hedley Junction finally became part of the downtown itself few decades later. The original trackage was built by visionnary railway contractor Horace Jansen Beemer (1845-1912), one of the best railroader of La Belle Province in the 19th century and sadly the most forgotten too. He developed the north shore railway network between Ottawa and Quebec City, including Laurentides and Lake St. John.
Posted by Matthieu Lachance at 3:36 PM No comments: