Why Rapido Undecorated SW1200RS Are Crap

I generally stay away from controversial topics in my hobbies simply because they are meant to bring joy and happiness. They are safety valves from real life stress. However, some aspect of this hobby can be both frustrating and excruciating... Dealing with our own shortcomings is something... dealing with others shortcomings, when they boast all day long and you pay for it it something else entirely.

I take no joy in trash talking about a manufacturer, particularly when I'm generally satisfied by their RTR products, but at some point, truth must be told both as a cautionary tale but also for the manufacturer itself to improve its game in town.

Two years ago, I was dumb enough to pre-order 3 undecorated Rapido SW1200RS. My hobby dealer told me it would be a pain in the proverbial ass to assemble them and that if I wanted to back up from the project, he couldn't sell them to other modellers because most people hate doing actual modelling and prefer to stack dozens of expensive RTR models on a plywood sheet. Well... I should have taken his advice... he was so right! Lesson learned I guess!

Why was it a bad move? For a large array of seemingly trivial irritants that built up to a big pile of you know what... Back in the day, buying an undecorated version was a smart move. You saved some money, didn't have to waste time stripping paints and breaking details by accident. In short, you started on a clean slate...

Now enters Rapido's definition for "undecorated" kits... which means paying the SAME price as a decorated and fully assembled and tested unit, being left with no basic instruction except a low quality cryptic part diagram from the 1990s, a semi-decipherable part list where nothing has a meaningful part name and bags full of intricate details of which many are already missing direct from the factory or simply badly cast. When I say bad, I meant bad. Imagine having to deal with delrin parts devoid of pegs!

I simply don't care Rapido send me replacement parts without asking question... particularly when they sent me the wrong parts or not enough to cover my needs. Worst, I'm still finding defective or missing parts up to this day. And no, while I can replicate a few of them myself, including missing metal handrail, I'm not in the mood of doing Rapido's job when I actually paid them to do it.

I'm tired of trying to figure out how to assemble these models using poor reference pictures online... I'm tired of stumbling on insignificant road blocks at each time I complete a step.

Worst, I'm still trying to figure out with the undecorated version that requires LESS human resources to assemble are sold the same price as a fully RTR unit. Particularly when it is evident the dude in China didn't care about making sure all parts were in the box during the quality check procedure.

This is not serious at all and I must stress it is quite sad because the model is well engineered and beautiful...

So, in the end, I paid a lot for crap. With taxes, this is about a $1000 going down the drain because a manufacturer is too lazy to do minimal quality check at the factory...

I should just have bought a RTR unit, removed the lettering and repainted it... It would have taken a few days at worst, maybe a weekend at best.

By the way, I had the same experience with Rapido's undecorated meat reefers last year... Once again, a beautiful model and the worst experience trying to put it together. And I've heard an extremely talented modeller tell me he would have prefered to scratchbuild the car rather than assemble another Rapido undecorated kit.

I sincerely feel Rapido should simply pull out the plug and stop producing undecorated kits. Visibly, this isn't their cup of tea and they don't have enough volume to put care in quality check for these. Better focus on what they do right and let this foolish dream die.

Now, where am I left with these half-built models? In the middle of nowhere. Many broken parts can't be easily replicated. God only knows if Rapido can send me more missing parts given the models have been out for a while and it already took several months to get a few of them.

I've lost about any remaining interest I had working on these models except for slamming them on the wall.

Posted by Matthieu Lachance at 4:49 PM No comments:

Email ThisBlogThis!Share to TwitterShare to FacebookShare to Pinterest
Labels: Thoughts about Model Railroading

Clermont - Blending Together The Scenery 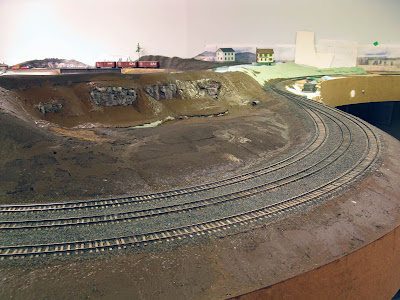 I'll be short this week because almost everything was said about techniques I use. Photos better render the sense of progress in Clermont. 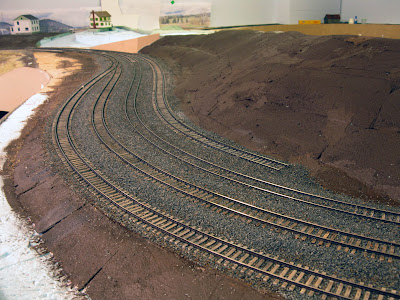 A good coat of brown latex paint and mud were used to blend together scenic elements.While mud is used to smooth landforms, it is also used to create more realistic embankment, including details of collapsing banks. 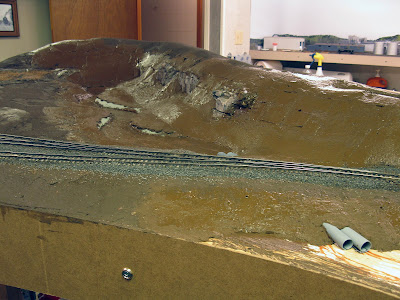 The culvert is also in place, completing the peninsula scene nicely. Next step consist in ballasting Wieland and starting to add ground cover and modelling the small creek. It isn't far fetched to imagine this will take all summer. 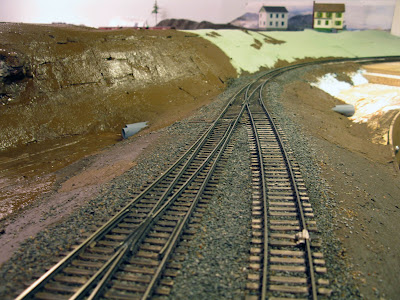 
I'd like to give a significant advice when using powdered resin glue to set ballast in place. First, while it works, you must ensure the glue is perfectly mixed within your ballast. To be honest, this is very hard to achieve due to difference in granulometry. My ballast grains are about 1mm which means the glue has a tendency to gather in some part of the mix, mainly the bottom of the crate. Even if I constantly stirred my container, it seems I couldn't succeed as best as I wished. It means some areas dried darker as if the ballast was still wet. Overall, I also think the ballast is darker than if I used straight white glue.

I've yet to find a solution to make my ballast a lighter shade. My guess is simply to use the powdered stone residue left from sifting the ballast and brush some over the roadbed. A similar experiment coudl be done using chalk powder or other fine material.

However, even if the result isn't yet what I hoped for, I noticed the powdered glue gives a wet look to ballast. It means that someone wishing to model a wetter scene would get a very nice effect using this technique.

This brings back to my mind an advice from Lance Mindheim who experimented with this type of glue a few years ago. The finer the ballast, the better the mix will work. Meaning that it would work better with very fine ballast and dust for roads and parking lots.

Some steps really feel like real achievement. Ballasting tracks is one of those and making what is basically an assemblage of material into a real railway. 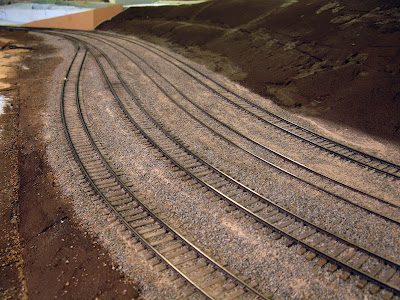 Long time ago, I used to hate ballasting. The process felt tedious at best, using my fingers to spread the material around the ties. The day I started using a large 1 1/2 inch paintbrush, it made my life much more easier!

Since I covered this subject a lot, I won't dwell on my technique. Basically, my ballast is a mix of locally sourced stones that match the prototype. I then mix some powdered DAP Weldwood glue into the mix. Put the ballast in place then spray everything with a mix of water, alcohol and white glue.W Works well for me and it's quite quick. Interestingly, this time I used a professional spray bottle instead of a cheap Windex bottle. Let's just say it made a terrific difference. I certainly would advise any modeller to purchase such a bottle instead of wasting their time with unsuitable material and getting frustrated beyond belief.

While some set their ballast in a mechanical way, Jérôme and I worked from Clermont yard photos to identify things that gave character to the place. We observed many small details we tried to replicate.

First, it was clear the yard was ballasted using only one type of rock. It is quite uniform in size and color. However, the way the ballast job was done vary greatly from one track to another.

For example, the short storage track is slowing sinking into the ground and the ties are buried under ballast near the wheel stops.

The siding along the hill is completely buried under ballast. Pictures ranging from 1998 to 2018 show it has always been the case. Thus, we buried out tracks too. With a small brush, we made sure ballast didn't hide the spikes head though. 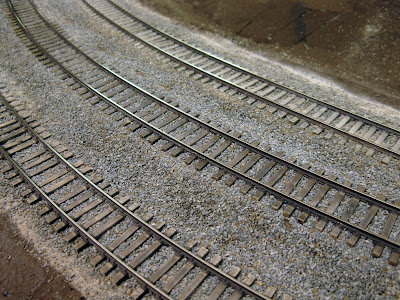 The mainline is well maintained with ballast quite clear of weeds and flush with the ties. This track is also slightly higher on the ground than other track due to better maintenance and road bed construction.

Finally, the outer siding is quite low and poorly ballasted. On the outside, ballast covered is thin and you can see the ties ends. 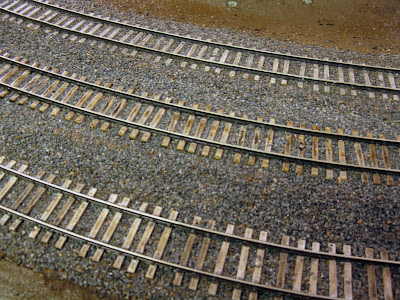 Finally, I'm quite satisfied how the tie color looks good with ballast. I used very light colors, which is quite rare in model railroading. However, doing so really makes the ties look like real weathered wood. Also, the darker shades on the mainline replicate well creosote seeping out of ties.

Now, I only need to ballast Wieland and the layout will be back in operation after almost 10 months of intense rebuilding. Scenery will be a walk in the park compared to that!
Posted by Matthieu Lachance at 12:15 PM No comments:

Painting track in Clermont is a long process, but a rewarding one. Last week, we started applying the oil paint wash over the primed ties. While I expected to complete the task in a single application, it took much more time than thought. 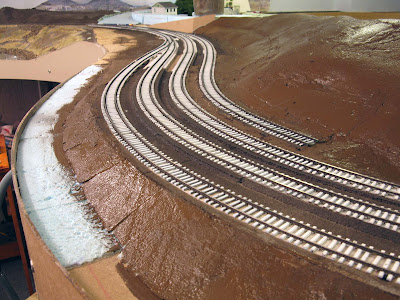 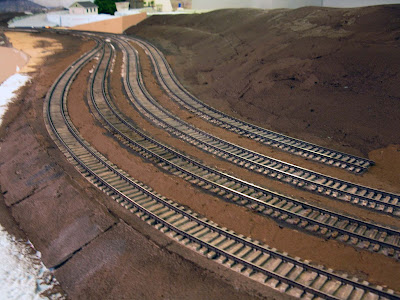 In term of pigmentation, I tried to alter my initial recipe to better fit what can be observed on the prototype. My initial experiment in Villeneuve was quite brownish, which was OK, but not for Clermont. While it's true creosote gives a deep brownish tint to ties, in the case of Clermont yard, most ties were old enough to appear a light gray in colors. For this reason, I tried to create a greyish hue similar to the one I used when creating old weathered wood on my kitbashed Revell plastic barn and telegraph poles. 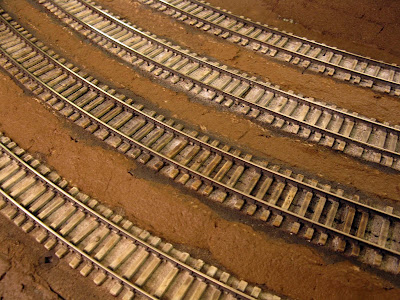 I think the results speak for themselves and show how giving attention to such details is a good way to both enhance realism and tell a story. It would be foolish to treat every tracks on a layout as a single block. In the case of Clermont, I want to streamline the yard by emphasizing the mainline while making the sidings "disappear" into scenery as was the case on the prototype. This difference helps to create a hierarchy of use, making it easier for operators to tell tracks appart. If you've been following how were rebuilt Clermont, you will understand this differenciation is achieved by taking into account multiple parameters. All tracks have a different elevation and roadbed profile, tie spacing, tie color, quality in ballast and vegetation grow. While this is done to strive for realism, I must admit my ulterior motive is to make the main line the focus. This is an optical trick so the layout looks longer than it really is, particularly given the weird configuration of this yard in the middle of a peninsula.
Posted by Matthieu Lachance at 5:09 PM No comments: