For the last year, I practiced weathering on cheap trainset quality cars. Since the result wasn't half bad and the layout needed an important fleet of gondolas and hoppers, I decided to upgrade all my cheap stuff instead of wasting a large amount of money on cars that wouldn't be prototypical according to canadian standards (CNR). All cars were repainted with Krylon Brown Primer (spray can), relettered using various dry transfer letterings/decals and weathered with highly thinned black washes, oil paints in mineral spirit and pastel chalk. Everything was sealed under a generous coat of Dullcoat.

This one started as a cheap IHC President's Choice Christmas Trainset 40' quad hopper. The quality of the cast-on details is far better than one may think at first. Follow the work in progress here. 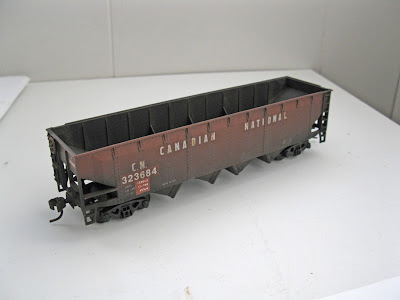 The next try was a major rebuilt of four Bachmann 40' unprototypical gondolas. They have been converted into drop bottom gondolas. They follow accurately a prototype built for CNR back in the 30's and still seen in use at least in the 80's.

The last ones are a set of five Model Power 40' gondolas. Cast-on detail is cheap and brake wheels were replaced by spare parts. The brake details on the underframe are from Accurail.

Posted by Matthieu Lachance at 6:36 PM No comments: