Time flies fast and Hindsight 20/20 is now back again for an 8th version. Once again, a lot of great modellers will share their work which is always a good occasion to pick up some inspiration for your own project. 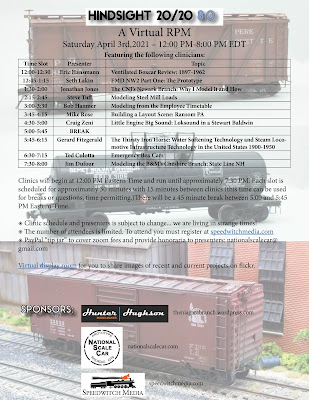 Of interest to me because we share a common profession - architect - is the presence of Jonathan Jones from New York who is modelling a slice of CNJ. He has a very interesting approach to modelling and framing a subject than is unusual but extremely relevant. I wouldn't be surprised it could inspire a few people out there.

As always, you can register at https://speedwitchmedia.com/.

I'm also pleased to announce a few "new" projects for the blog, including a few articles about weathering centerbeam flatcars in military modelling fashion and probably a series about replicating the famous brick station in Drummondville, QC for Groupe TRAQ's exhibition layout in Charny.

Posted by Matthieu Lachance at 9:07 AM No comments:

Email ThisBlogThis!Share to TwitterShare to FacebookShare to Pinterest
Labels: Events

Adding Weight to Tichy 40' Flat Car and Other Improvements

I completely lost the sense of time since the year begun. My modelling efforts are all over the place, jumping from one project to another, aimless and undecided about what to do. As I said numerous times over the last few months, I would just like to run some train and appreciate it moving around... Crazy, I know!

Since January, I've bashed half a dozen 50ft CP Rail boxcars, started a fleet of Maine Central Pine Green 40ft boxcars, a small cameo layout (which I hope to lay track and wire when COVID-related restrictions will ease) and weathered 7 Walthers Centerbeam flat cars: 4 for our Murray Bay layout, 3 for a MMA/CMQ consist. I've watched and rewatched in loop many Martin Kovac's military modelling videos (Night Shift on YouTube) recently and it gave me the impetus to seriously rethink my approach to weathering. I won't chew my words: model railroading is dumb (and completely outdated). It seems to me we are at least 20 years if not more late in the game. Something I felt interesting with Martin's work is how he works with textures before painting a model. I was really impressed how he add cast metal texture to styrene using solvent cement and Tamiya putty. Really a good source to get better at weathering. It was also interesting to see how he builds and paints terrain in a way we would never dare to experiment in model railroading. Certainly, these techniques aren't viable on larger projects, but they can be use in signature scenes or spot were our eye is close to the action (roads, parking lots, customer yards, etc.).

But this isn't my main subject today. As you may not know, my most popular article was written many years ago about adding weight to Tichy 22' ore cars. Like many Tichy kits, they are beautiful but weigh nothing and thus are a real paint to run on a layout. Last week, I decided to build two of their 40ft flat cars to add some CN cars to my 1950s fleet. Straight forward build, but these a criminally light. I know most people will add loads, but I like when cars can be run empty too. So I studied the model under various angles to see how much weight I could pack underside without being visible when displayed on a layout. To be honest, I understand neat underframe details, but if it means the model is barely fit for operation, it means nothing. At this point, I'll keep my old Athearn, Tyco and Model Power flats because you can easily conceal more weight. I'm half kidding!

Using some steel shots, I filled the space between the fishbellies. Tichy provides a metal weight, but there is still some space for more. But honestly, it didn't made a big difference, thus I added small styrene stripes under the deck and filled the "boxes" with more steel shots. Yet again, it wasn't enough... so I added a few more shots between the fishbellies and the styrene strips. Total weight without trucks and wheels: 1.17 oz. That's appaling! With metal wheels, trucks and coupler, it barely reaches 1.75 oz which is short of 2 oz to reach NMRA recommendations. More shots can steel be added, but I feel they will be noticeable from the side and bury a lot of details that are visible. Another option would be to use lead or other heavy metals... at your own risk since they aren't hidden inside a shell. To be honest, it makes me appreciate even more Atlas 85ft flatcars in die cast. It seems to me the only way to have good flat cars.

With weight questions aside, I also turned my attention to the wood deck. It looks good at first, but the grain texture is barely visible. I thought it could be improved so weathering would give better results. For this reason, I decided to add texture with coarse sandpaper, but it wasn't enough.

Then, I used a metal point and a hobby blade to scribe and distress some planks even more, as if they were rotting away, thus creating a more irregular look.

When it was done, using the same metal point, I added nail rows to create another layer of realism. It took quite a while, but I feel it really make the decks pop out. It takes time but I believe these extra details really improve the look of a freight car.

To be honest, it matters more to me to have realistic deck than invisible piping under the deck that isn't visible and makes the model too light. In that regard, I'm surprised very little manufacturers care about decks but waste their time with useless details. I perfectly know it does matter to many peoples, but I'm pretty sure the average modeller don't care an iota about the trainline and would prefer a ultra realistic deck given the choice.

Anyway, with that said, we now know two things. Tichy flat cars are far too light, even when adding a reasonable amount of weight and they can be drastically improved by adding texture to the deck.

Posted by Matthieu Lachance at 8:51 AM No comments: