Once Step Forward and Two Steps Back

Well, you know the song! I've been crushed under voluntary work for a local convention lately (not train-related) and progress was slow.

Among the achievement, I'm happy to announce my 5 other CN woodchip roofless boxcars are almost done. Some numbers are missing and that should be done shortly. Finally, we will be able to operate real trains to Donohue. The next project will be to complete my 3 CN RS18, at least weather the Proto 1000 zebra version I already have. 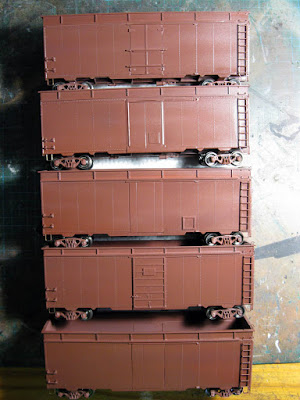 I also painted the track ties in Maizerets. I followed the same recipe I used when doing the small Quebec Southern Railway layout last year. It gave nice results and I feel no need to change a winning formula. I only imporved the random coloration to better match real ties colors (often reddish). 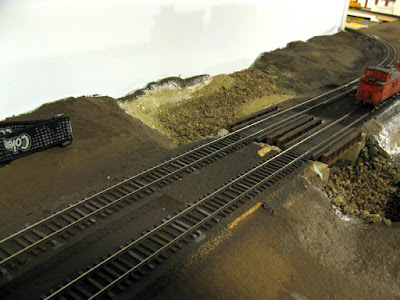 The bad part is about recurring electrical problems plaguing the layout. Early this year, everything ran fine and now things are getting messy. Locomotives stall everywhere. Some issues are because not enough feeders were soldered to rails. I once advice my fellow club members to put many around turnouts, which they found repetitive. Sounds like I was right that time! Louis-Marie did some corrections and it should now be OK. 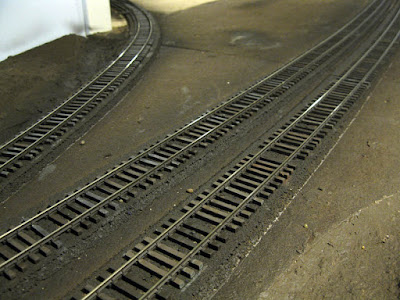 But, at the same time, we started to have serious problem with the DCC module. Troubleshooting took a while and finally we discovered some wire inside the box was badly damaged because it was loosely installed at the factory. The connector broke. It will be repaired as soon as possible. This was quite annoying because it was now impossible to adjust decoders using a computer.


And the last one is about the unreliability of some locomotives. At some point, upgrading pickups and track work doesn't do the job. It has been decided we will try to install capacitors into some locomotives to test if it would be enough to get rid of these annoying dead spots. I'm really starting to think some engines would benefit being battery-powered at some point. I'm not there yet, but my recent interest in G scale train convinced me there was some hope there, particularly for critters (smaller GE locomotives, etc.).

I'm also seriously thinking about downsizing my locomotive fleet. Many models are outdated and not worth getting an overhaul to run on the layout again. Many doesn't fit the setting anymore or are from prototypes that doesn't interest me that much. I feel hoarding more rolling stock is just a crazy idea and that it's time to move forward.

Am I discouraged by all that? Not at all. I was expecting we would encounter highly undesirable electrical problem and that some locomotives would pose a few problem. It was only a matter of time and now's the perfect moment to address them to make operations work smoother.
Posted by Matthieu Lachance at 7:07 PM