Yesterday, Jérôme started to build a prototype for an operating derail. We need 4 of them on the layout and he decided to try Tom Klimoski's trick using Alexander Scale Models Hayes Derail #A-9501. 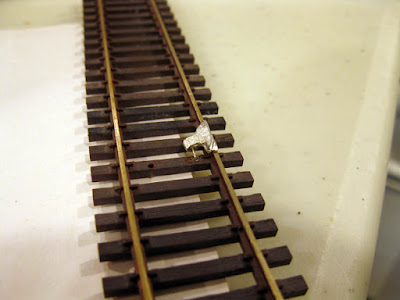 The modification is easy. You file down the moving part until you only keep the useful part. Then you drill a hole to insert a custom made hinge built with a piece of brass rod. This U-shaped rod is then inserted in holes drilled into ties. For more realism, styrene sheet or parts salvaged from the Alexander kit will be glued on the ties to replicate the metal hinge better. This is the kind of detail I like: realistic, operable and simple to implement. 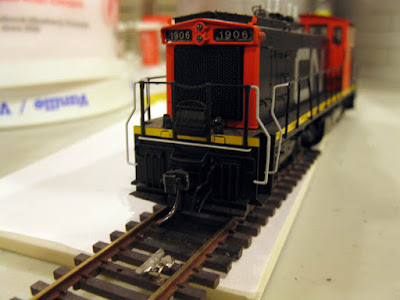 Also, when I was swtiching some cars at Maizerets, I came to the conclusion some prototypical operations makes no sense when you have no sound or action to make you believe they happen. Setting handbrakes, uncoupling cars, pumping air are all concepts that can't be conveyed by waiting the clock move around.

After a while, I thought it would be great to have a "sound box". Something similar to a DCC cab but fitted with common railway operation sounds. You push a button and you hear the handbrake wheel turn. Something very, very simple. We tried a mockup using a cheap MP3 player and the result is more than excellent. People with smartphone could probably achieve the same thing with a playlist of railway sound. In fact, there is a lot of different ways to achieve this result so I won,t bother describing ours in detail.

However, this has nothing to do with sound decoder in locomotives or sound cars. Both of them makes no sense to me. I don't want to hear the coupler clank out from a distant locomotive, but on site. It's why a portable sound device is the best. The sound is heard where you are performing the task. And you don't need to wait for a given amount of time that means nothing since the sound explicitly tells you what's going on. 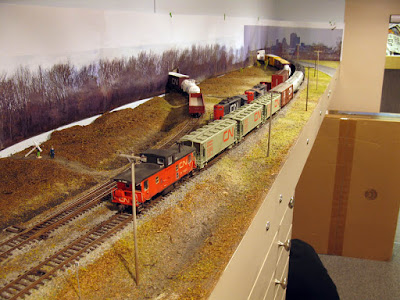 I'm curious to see how this idea will develop into something practical in the future, but I find it interesting starting point to materialize practices that can't be scaled down for obvious reasons. As a matter of fact, I held two small switching sessions yesterday. One with a small HO scale brakeman figure and one without a figure. Seriously, I find operating with a figure far more engaging than without it. Call me childish, but I'm more prone to respect speed limit and coupling/uncoupling procedures when I have my little brakeman working the train. It also forces me to better think my moves since I don't want him to walk uselessly or throw turnout twice when he can do it once. It is probably the most basic way to implement realistic operation without feeling forced to apply invisible rules.

Posted by Matthieu Lachance at 7:05 PM