Long time ago, in the second half of the 1990s, I had a dream. Having recently discovered the existence of Quebec Railway Light & Power, I dreamed of kitbashing their MLW 2-6-0 #22. With the means and knowledge of a teenager, I bought a MDC/Roundhouse 2-6-2 Prairie kit, certain I could figure out a way to make it a worthy model. However, serious dimension discrepancies, problems assembling the drive and difficulty to work with solid metal parts plague the model.

Later, I tried my luck with a IHC 2-6-0. The tender turn out quite well, but modifying the drive was near impossible. I completed the project, but unsatisfied by the look, I decided to simply paint it as a generic CNR engine. Now that I look at it, it reminds me it's never a bad idea to try a second time a same project, learning from previous mistakes.

But I never forgot about #22. With my Temiscouata project tied with the construction of a new garage (which I'll have to postpone to next year), I think it's a bad idea to simply sit on my chair and wait for the weekly club session.

A recent discussion about minimal layout with fellow modellers sparked my interest in minimalist layouts. Temiscouata is a good example and I can't wait to pour efforts on that project, however, many other nice prototypes exist out there, begging to be modelled.

Among many of them, Legrade in D'Estimauville is a premium choice. The variety of cars, the interesting structure and several challenges associated in reproducing the place are extremely motivating. Better, I already have a substantial fleet of QRL&PCo cars and some more waiting to be completed. It would be truly great to put this material into service. It is also good to note only one turnout is required to make this project come true, which means very realistic trackwork could be easily achieved.

According to my sketch, Legrade can be reproduced using less than 96" x 24" (even 80" x 24"). It would make for a terrific shadow box style UK layout with proscenium and integrated lighting fixtures. 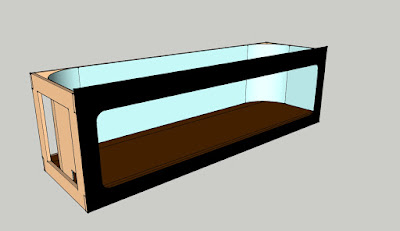 I've also did some researches and found out a decent #22 could be build by merging a P2K 0-6-0 drive (same wheelbase) with a Bachmann 2-6-0 Mogul superstructure. 56" drivers from the 2-6-0 would replace the 0-6-0 smaller wheels. I already have both engine in hands and none never fitted any of my project. Anyway, they will be superseeded by new Rapido's Icons of Steam offerings in the following years. Given the excellent performance of both engine and the wealth of details each has, the project wouldn't cost that much to bring to life. Also, the great performance of the new Loksound Full Throttle steam decoders make running steam extremely attractive.

It is also interesting to note #22 was a strange locomotive. Built as a Mogul, it was designed using a switcher wheelbase, short cab and high vision small capacity tender. This make sense given the locomotive's main role was pulling transfer runs between Québec City and St. Joachim while doing some switching duties along the road.

As for a specific year, I'd say 1951. It was the last year QRL&PCo was an independant railway and just before #22 was send to Montreal for renumbering only to meet the torch in 1953. This era also makes for a nice mix of old QRL&PCo cars, CN wood and newer steel reefers, old short tank cars and classic motor and horse drawn vehicles.
Posted by Matthieu Lachance at 10:23 PM