As much as scenery can be a fun aspect of model railroading, any layout plagued with mechanical and electrical issue is bound to provide frustration for years to come. For this reason, we have continued to implement our standardisation program of rolling stock, motive power and track improvement, particularly brand new cars freshly out of the box and older ones that weren’t improved. Weight was added, wheel gauge checked and coupler height adjusted. To these basics steps, every wheel treads were cleaned with a steel wire brush on the Dremel motor tool to polish them and remove gunk. After a decade of use, many wheels were covered in dirt, paint and dullcote from weathering process.  It was time to remove once for all that mess. 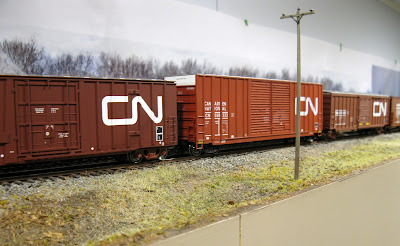 It was also a good occasion to address a few boxcars that were tilting on their sides. After careful examination, it became evident the reason was simple: the bolsters and underframes were not properly sitting on the car floor. Removing excess glue and reassembling the cars too car of that problem, improving the performance and visual aspect of these boxcars.

We also completed our new "cleaning car" based on the old tried and true trick of a Masonite under a boxcar. It serves well its purpose and was extremely useful for something it wasn’t designed: finding out spots covered in white glue and scenic cement. Every time the locomotive wasn’t able to pull the car over a stretch of track, it was a good indication the surface wasn’t clean and required some elbow grease to shine again.

Finally, a last word about the re-released Walthers CN insulated boxcars (based on a FGE prototype). While the tooling is getting old (being first produced in the mid-1990s), Walthers significantly improved the old version with finer stirrups, more correct paint color and prototypical lettering. I also found out the roof assembly was improved. All in all, certainly not a bad car out of the box and well worth the money. From there, one can add some vents and other such details to bring the car up to today’s standards. As for myself, I’m rather satisfied with these new acquisitions that will support more bagged cement traffic in Villeneuve.
Posted by Matthieu Lachance at 8:55 AM