Putting a Face on Your Layout

Well, for some changes, let's take a look at something more lightheated than the last post.

I often wrote here that operating a layout was, at the end of the day, some kind of game. You lay some rules and then you play your game. However,  a crucial aspect of playing this game is tracking down your moves. Sounds and mechanical devices can only replicate some very specific actions but barely take into account the human factor. A big deal of real life railroading is about car and human movements. The closer they can overlap, the more efficient operations are.

For most of us, this overlap never occur because the human factor isn't truly taken into account. It means that without the limiting human factor, we end up being far too much efficient, flipping our turnouts at the touch of a finger the moment our brain process the information.

While I concede replicating a walking human on a layout can never be more than an approximation, as imperfect as it can be, it is better than nothing at all.

No surprise that for years, well-known modellers have used brakeman figures to better get a grasp at what they are doing. At this point, we aren’t not very far from action figures and, I feel, it’s for the best. This is even more interesting when operating in team. Both people start to better understand what they are doing. Little details like protecting a grade crossing, bending a turnout iron, cutting cars at a specific location or setting handbrake start to make much more sense because they now have a visual cue.

I certainly agree most figures on the market are far too costly for their less than impressive quality. Over the last few years, better figures are now available from smaller manufacturers, including ones based on scanned real human bodies.
In our case, we’ve come to the conclusion old Bachmann figures depicting 1950s people are still doing a decent job for what they are. One of them – a conductor raising a lantern – has been a favourite of us. His slim nature makes him easy to place on locomotive running board while his raised arm and lantern are perfect to hang him on car handrail. While not realistic, his base is also quite useful when he’s supposed to be standing at a turnout or protecting a grade crossing.

However, it must be noted this guy can hardly look like a railroad worker from the 2000s. For this reason, Jérôme asked me to modernize the little guy a little bit and maybe try my hand on other figures. I worked using pictures of real life CFC employees.  Their most striking and common features were blue hard hat, safety jacket and dark clothing. 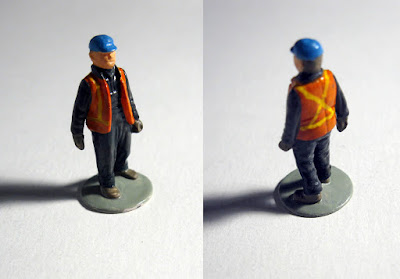 Fortunately enough, the old 1950s hats are easy to shape into a hard hat using a file. As for the safety jacket, they are quite easy to replicate because people back then often wore jackets and coats. In our case, Bachmann figures have this feature and it’s only a matter of painting the jacket orange and the sleeves another color and you get it right. Finally, the lantern can be removed all together and replace with a very small brass hook.

Once painted, these figures play their role and set the era convincingly, which was our original goal even if they don't look terrific. That can be address later on with better figures and paint job. At this point, sky is the limit and pushing the concept limits is a matter of personal choice. Many modellers drastically reshaped figures, adding posable limbs and even adding magnets.

Posted by Matthieu Lachance at 8:09 PM