I wished I could have written more blog posts in the few last weeks, but new professional challenges, bad sleep and generally lack of motivation meant I had very little inspiration to put my thoughts in words, particularly through the lenses of a second language.
I've spent the last few days questioning again a lot of received ideas in our hobby... This never ending question for a perfect recipe supposedly bringing happiness. I'm getting tired of seeing model railroaders almost bringing up the same ideas forward and apply them in a mechanical way. Several raise the bar, but I don't feel any interest in blindly following others' foot steps without trying to understand what lies behind their actions.
Meanwhile, I've abandoned, for the moment, the idea of a layout in my hobby room. So far, I have about 11 strong concepts but can't hardly decide. I know what I want to achieve, but I'm not yet there, so instead of that, after looking again at small UK switching layouts, I decided to start a new project which took about 10 minutes to draft and 10 minutes to mockup on a melamine plank. More details in the future, but this project is linked to the questions in raised earlier. I've always wanted to build a layout using an artistic approach. Something less grounded in defining realism by strict adherence to a prototype, but rather grounded in a subjective observation of reality. It means I'm more trying to capture an ambiance, textures, masses and colors. In that regard, interesting discussions with Chris Mears in particular, and other friends, made me realize how much color palettes have a crucial role in creating a sense of place on a layout. These palettes go far beyond simply replicating what we believe to see, but rather to find what ties every elements of a scene together.
This artistic method means I've been experimenting with paint, structures and rolling stock. While I tried to find a way to paint realistic brick walls, I simply got rid of every useful and messy trick in our hobby and watched professional artists painting oil landscapes. In a matter of a few minutes, it was clear that to me we got it all wrong, approaching the subject from a bad angle. Sorry to rain on the parade of countless modellers over the last few decades, but simply having a basic comprehension of color theory and observing real life subjects in terms of light and colors if more than enough to outperform our traditional approach. Sadly, nothing new under the sun and these techniques are well-known by European modellers or military modellers. 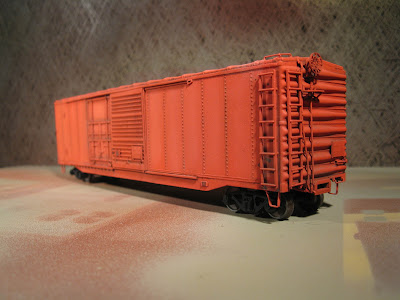 This prompted me to work again on my fifth CP double door 50ft boxcar kitbash based on a Model Power plug door boxcar. Once again, instead of applying a nice coat of Action Red and lettering the model prior to weathering, I simply inverted the process. Since these cars often turn orangish after a few years and my bottle of Action red was depleted, I used CN orange mixed with red and white. From time to time, I changed the ratio as I was airbrushing the model until I got the fading patterns just like on the prototype. Roof was faded a little bit more. 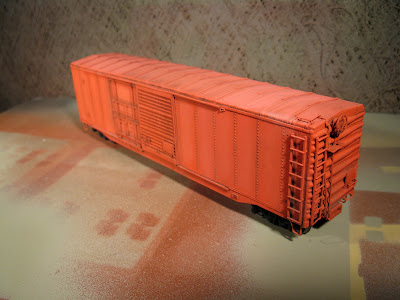 Then, an oil paint burnt umber wash was applying to add a coat of grime on the model and into crevices. When dry, a subtle layer of Panpastel was carefully brushed on rivet lines and everywhere dirt was accumulating on real cars. A coat of Dullcote sealed everything, making for a nicely weathered car ready to receive its dry transfer lettering. 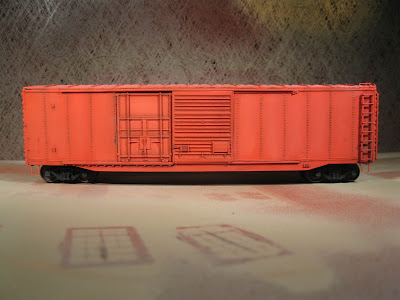 Why did I bother preweathering the model? Because it is easier to fade the color and add filters when you don't have to care about obscuring white decals. In real life, white lettering always stays cleaner than the car color. It seems dirt is washed away... Great modellers achieving wonderful weathering job waste countless hours trying to clean these letters one by one... this is simply crazy and unproductive. With RT models, there is no easy way out, but if you deal with custom painted model, why waste your time? Once the lettering will be done, a final weathering layer and effects will blend everything together, just like in real life.
So yes, I'm trying to find my own way to express my modelling... If what you want to tell can't be conveyed easily by "model railroading techniques", maybe it's because theses recipes aren't the adequate language to tell your story. Why cling on them like an adult unable to leave his mother's skirt?
In that regard, I was quite pleased by Bill Henderson's Coal Belt layout. Chris Mears (again), introduced him to his work... While it may seem outdated by today's standards, Bill had a coherent artistic vision and it truly shows. His capacity to work with color palettes and textures, particularly when dealing with winter and fall scenes, is a lesson in itself. But what I found interesting was how in his interview by Allen Keller, he was constantly referring to lessons already learned in the 1930s and 1940s, but completely forgotten. I couldn't help but draw a parallel between UK modelling which also saw, at the same time, the development of a similar creation of fundamental design concepts. It certainly whet my appetite to read about these early pioneers who had to work with serious limitations and thus, had to think outside the box.
Posted by Matthieu Lachance at 2:44 PM