All layout concepts should get their own scale model to test their validity. In that regard, I once did it for Temiscouata, Hedley Junction and Glassine Canada and never regretted it once.
Since yesterday was Hingsight 20/20 (which I had almost forgotten), it was the perfect time to cut some cardboard and see if CN Armagh Subdivision is a sea-worthy vessel or a rock at the bottom of the proverbial lake.
A quick visit at the local art supplies the day before to get a few white cardboard sheets cost me $4, which is a trifle compared to what would cost a an entire layout. After a few hours, I had a layout, or more exactly, the skeleton of a layout. I didn't bother yet to add scenery, wanting to see if the tracks meshed together well due to a complex variation in elevation. Here's the result and a few observation. Chris Mears like to refer to this design as two interrogation marks due to each scene sinuous track nature. We are not too far from the "mating" interrogation marks! 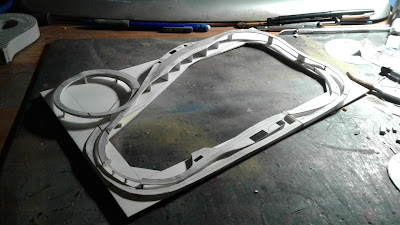 This overview shot shows that the concept does work. It creates an interesting spacing wrapping around the spectator, which is exactly what I wanted with this railfanning layout. 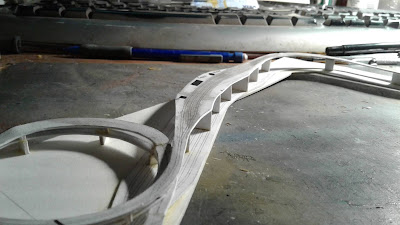 Armagh is a neat rural station marking the summit. The long flowing sidings are both natural and make for a perfect vantage point to appreciate long consists travelling the line. I some sense, this isn't far from a Confalone scene. 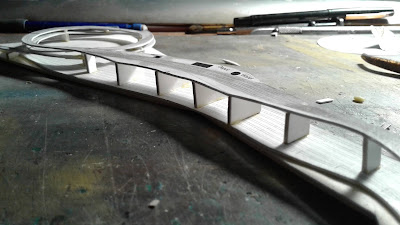 The large helix west of Armagh would be partially buried under some topography, leaving only enough track visible to replicate a horseshoe curve so typical of Monk. Poor farms, old barns, fields and woods would create the perfect background for this very deep scene. 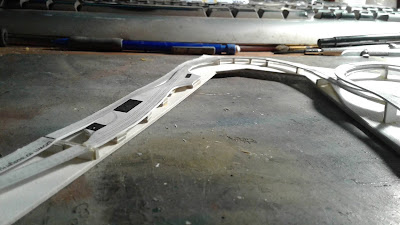 Langlois Siding is a gently curved stop on the line, serving a feed mill and a flagstop. In the back, we can see a 3 spans deck bridge crossing the Abenaki river while the train start to gain altitude to reach Armagh. This makes for a fantastic and scenic alcove to both perform operation and watch train rumbling over the bridge. 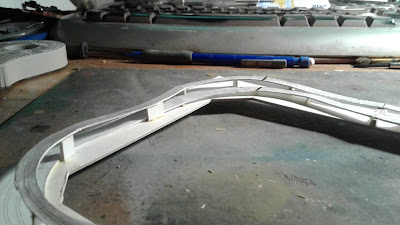 Finally, the last scene is where both tracks from Armagh and Langlois Siding cross each other to reach the underground staging. This isn't an easy scene to plan, but seeing it in 3D helped me to have a better grasp of the parameters in play. Instead of forcing topography and features there, I can simply look at what I see and imagine how it should look. With that said, I came to the conclusion the foreground curve near Armagh (left) would be partially hidden behind a very small hill sloping down toward the backdrop. Then, the first stretch of straight track would be a large fill over a deep valley - the famous Armagh Viaduct. This is a signature scene on the line which I wanted to integrate but never really did from fear it would look out of place. For some reason, it now has a home, exactly where it should have been. This is a terrific spot to get a glimpse at locomotives pulling heavy trains at notch 8. The upper track, then curves again in the back where it would disappear once for all behind a hill.
On the foreground, just after the center curve, the lower line emerge from a heavily forested cut and works its way to Langlois Siding by running against the side of a hill that was cut to make place for the roadbed. Rather simple, it should blend well with the next main scene which, as you know, is also very mundane. At best, a small culvert could find it's way. Here's a crude sketch showing the imagined scenes. 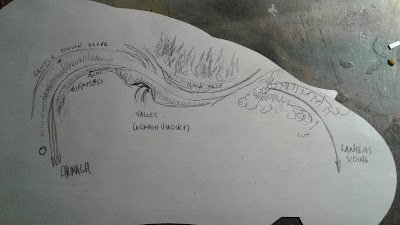 While this model is quite basic, it provided a wealth of information. Not only it confirmed the project was sound, but also that it wouldn't look silly even with the very large helix taking up a lot of space in the room. It was also a powerful tool to work out some problematic spots I couldn't figure out in 2D.
Nothing is set in concrete, but the CN Armagh Subdivision is looking even more promising than ever. I can see a convergence of my interests that were explained on this blog over and over. I can already hear the whistle and engine noise of distant trains finding their ways in an inhospitable mountainous terrain... probably some good old Alco sound!
Posted by Matthieu Lachance at 7:24 PM