Donohue: No More Ballast... or Almost!

Work is resuming on Murray Bay Subdivision after a longer summer hiatus than anticipated. Always hard to make predictions about a layout construction schedule isn't it? 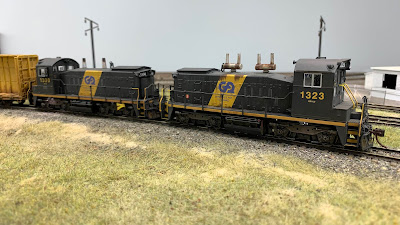 On a positive note, the first session was extremely positive. First, Louis-Marie has been able to reset the DCC system and locomotives. So far, it seems the control issues have been almost completed resolved and the Rapido CFC SW1200RS switchers are back in service. This is a major step since we built the layout to run these specific locomotives. To be honest, it's quite nostalgic to see these moving on our layout. And I may add that as much as the GP15-1s are quite interesting locomotives, they don't have the aura of real CFC ones. 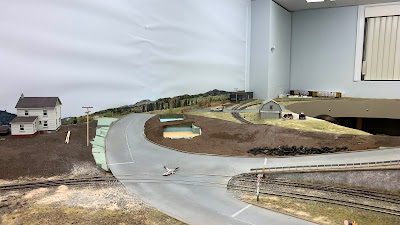 On the scenery side, we have also completed terraforming the right side of the village in Clermont. Foam is shaped, covered in universal mud and painted. A few curbs will be added later when dealing with ground cover. That another thing behind us. Regular readers will probably know it took years to finally reach that point with that scene. 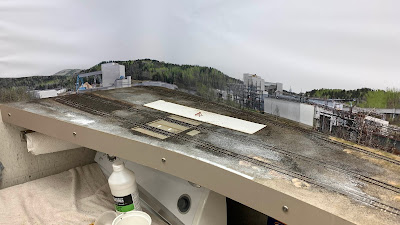 Finally, the big news: ballasting is completely done. No more gravel to glue, no more custom blends that takes hours to sift. It's done... at least in Charlevoix, because some more ballast is required at the cement plant in Villeneuve. I'm quite happy because it opens new opportunities to move forward with vegetation, layered ground cover, details and finishing touches. It also means I'll soon start to complete structures such as the woodchip unloader and the warehouse interior. Who could have thought we would see the end of that endeavour. 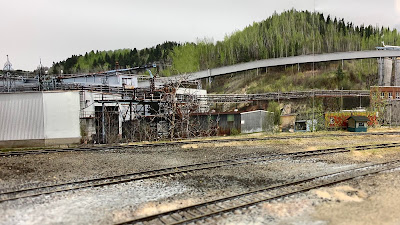 On a negative side, the summer was extremely wet in Quebec City and the photo backdrop wrinkled quite badly. It's probably the last time I used a photo backdrop printed on a material vulnerable to humidity. I'm not looking too much at the sky when operating the layout, but on picture, the wrinkles create nasty shadows that must be Photoshopped which is a shame... I'm starting to wonder if we should have been better to cut the backdrop at the horizon and simply keep the painted wall for for sky... Lesson learned I guess!

Posted by Matthieu Lachance at 9:35 PM