Here’s a general walk-through across the layout as it could be seen in late November 2010. Most tracks are Atlas N/S code 100 on mainline and passing tracks and Atlas N/S code 83 on industrial sidings.  Yard is made out of 9” sectional brass tracks from various manufacturers. In fact, we were short on flex-track at the time and weren’t sure of our design so we used them to mock up the yard quickly. We encountered no operational issues with them so they should stay in place for a while. Bridges are 72’ plate girder units from Central Valley. Mainline will be raised on N-scale cork roadbed.

The visit will start from the south to west (left from right).

Dufferin-Montmorency Elevated Highway hides Hedley-Junction, located virtually behind the wall (and the staging area). The CNR mainline runs in the background, the second track with turnouts leads to the passing track, the yard and the caboose track. The two sidings in the foreground belong to Champlain Oil Co., our local petroleum products dealer. It was first designed as a diesel engine facility and is electrically insulated. It is often used to store a switcher or a road engine. The mainline is colloquially called “Grand Nord”, the French translation for Great Northern Railway of Canada, the company which planned and started to build this track in early 20th century. 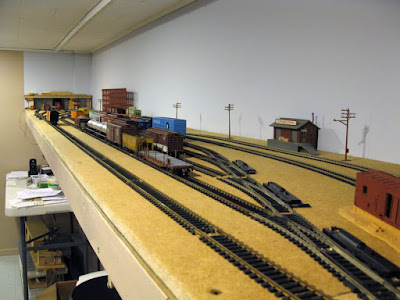 Limoilou yard as seen from the north.  From the background to the foreground are: an industrial siding, the mainline, the four-track yard and the yard passing track. Bachmann Clybourn station is a stand-in for Fournier & Papillon Ltée., a builder’s supplies warehouse. 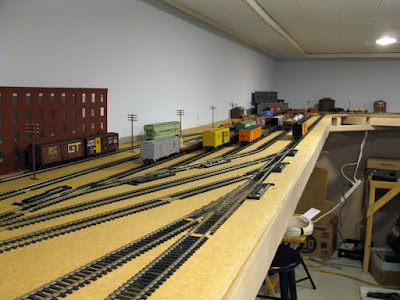 Limoilou yard as seen from the south.  From the background to the foreground are: Canadian Glassine Ltd. siding, the mainline, the four-track yard, the caboose track, the passing track and Champlain Oil Co. sidings. In the far end of the yard, you can see the tracks curve over Canardière Road Subway.


Between Canardière Road and 18th Street (in the far background) are Transport Couture Ltée. (nn invisible building left to the brick factory), Canada Wood Flush Door Mfg. Ltd. (brick factory) and Citadel Salvage Corp. (Life-Like overhead crane). From the background to the foreground are: the industrial siding, the mainline, the yard lead and the team-track. Team track was initially designed as a stub-ended track, rebuilt as a passing siding for engine and reverted recently to its prior nature. 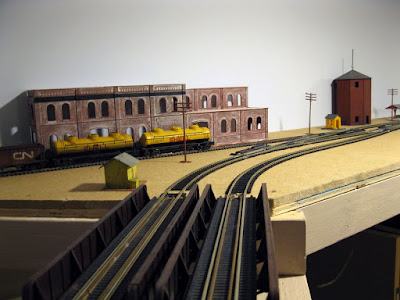 18th Street Subway is the gate to the western-most part of the layout called Lairet. The DPM brick structure is Chanteclerc Ltée, a sodium hypochlorite plant. The enclosed water tank is part of Lairet Station. From the background to the foreground are: Chanteclerc siding, the mainline and the yard lead connecting with Lairet Station passing track at right. 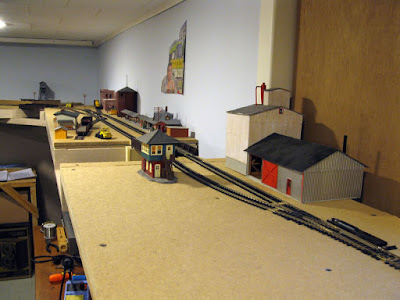 Lairet Station as seen from the west. The interlocking tower and grain elevator aren’t part of the layout. In the background, you can recognize Citadel Salvage Corp., the 18th Street Underpass and Chanteclerc Ltée. From right to left are: Lairet Station (infamous Atlas kit), the mainline (Grand Nord), the passing track and Drouin & Drouin Ltée. siding (a lumber yard). The plate girder bridges are 1st Avenue Subway. On the prototype, Lairet Station should be located right to Canardière Road (in the place of the team track), however, for space constraints and to make it more visually interesting, we moved it to 1st Ave.

One can see a newspaper article pasted on the wall about Mayor Régis Labeaume's new tramway project for Quebec City. Purely there to poke fun at him because he was a strong opponent to rail transportation when elected and now changed his mind as he often do! (Just to make it a short picture, the man is nicknamed "Napoléon Bonaparte" for his furious style of management. A real tramway served Quebec City from 1863 to 1948... But maybe we will fudge things a little bit and make them run until 1957 on Canardière Street (double track) and 1st Avenue (single track). We already have in hand a set of Bachmman Brill Trolley painted in the prototypical Quebec City color scheme.

Posted by Matthieu Lachance at 9:58 AM