Over the last few days, I revisited my 3D model of a CN Transcona Woodchip Gondola. The goal was to make a new model with more accurate data, which was easier than I thought and yielded great results. The other thing was to make it as optimal as it could be to be printed using the finer Frosted Ultra Detail acrylic used by Shapeways.

Seriously, I think I've been wasting a lot of time on that utopic endeavour. I even wrote 2 long blog entries I deleted. To be honest, I'm quite proud of my 3D model but I fear Shapeways is in no way able to print it correctly. I've read countless forums and blogs to see how others have worked around their own models. I find out most of them end up with very rough models that looks very cheap once painted. The technology isn't advance enough to sustain what I consider to be a decent level of quality for the price.

All in all, printing my actual project in FUD, four shell at once to save on handling and shipping, would cost CDN $90 per car once completed. If the model were pristine I think I would be less reluctant. But paying this price for one car with a semi rough finish worth a 70s Life-Like offering just makes no sense. At this price, I'd rather start buying 40' NSC boxcars from True Line and remove their roof. At least, I'll have 2 superbly detailed and prototypical woodchip cars for one 3D print.

I think there's a long way to go in 3D printing. I'm not giving up hope, but feel the time isn't not right for this kind of project. In another hand, I would glady try 3D printing for items were a smooth steel-like finish isn't a prerequisite.

I'm left with one option: build the car from scratch and find a way to make the process easy to work as an assembly line. It would be time-consuming, but at least, the final project would look smoother.

If you think I'm wrong in my assumption, you can contact me to show me your succesful 3D prints in HO scale. I'm seriously looking for that. So far, I'm not that impressed by what I see around.

I'll be bold, but at some point, I feel I should try to build a few of them. In the past, each time I tried to reproduce some canadian prototype, a manufacturer picked up the project! Maybe I should start to build a Kaslo M420 just in case!

More seriously, I would gladly give a hand to any people wanting to cast this particular woodchip gondola. I think it would be a very interesting piece of canadian rolling stock that would fill a need. 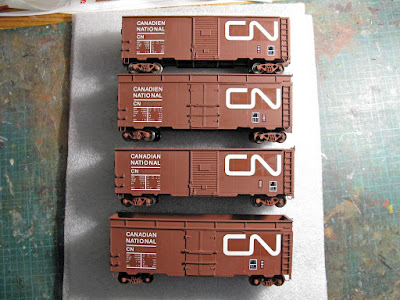 Anyway, that didn't prevent me to work on my woodchip boxcars. Now I have 4 shells painted and partially decalled. One shell is almost completely modified and await grabirons and paint. 4 shells are ready to add details (doors, cast-on details and roof removed) and one shell still need to be prepared.

Today I received many detailing parts from Accurail and Tichy, so no reasons to not complete this project. However, I'll need to buy many decal sheets. It's only a shame that most manufacturers only have sheet with enough detail to complete one car. Once again, I'll end up with dozen of useless Microscale blue CN wet noodle. WILL THEY EVER UNDERSTAND THESE DECALS SHOULD BE PRINTED IN BLACK!!!!!!!!!!!! Once written to them and they told me they had "physical" reference for blue lettering... I've never seen a single one in two decades! Anyway, even the font they use to spell "Canadian National" is wrong. Maybe I should give CDS dry transfer a chance again.
Posted by Matthieu Lachance at 10:15 PM