Last week, I cleaned locomotive wheels using an alcohol soaked paper towel laid over track. That's an old trick: you feed power to the locomotive so the wheels turn on the towel. A truck at once. The only problem is to keep the locomotive from running wild by keeping it in place with your hand.

Louis saw me and designed this crude but clever device this week. Probably many modelers already invented this gadget over the decades, so nothing new under the sun. That said, it will make cleaning locmotive's wheels a lot easier and less tiring. 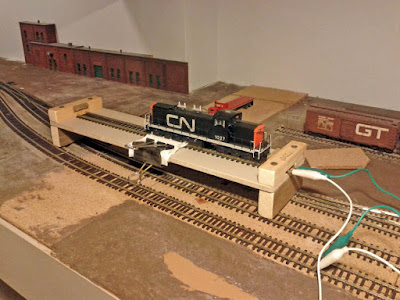 To be honest, a lot of work has been done on the layout over the last year. As much as possible, we tried to operate trains over partially completed tracks. Sometime, dirt is hard to see with your eyes and thus we didn't bother cleaning too much our stuff. A newbie mistake, I know. Since a few weeks, the running performance of my pair of redetailed Bachmann GP9 dropped significantly. That was quite odd since their electronics had been improved and they were already smooth and reliable performers. Well, after cleaning the wheels, about 90% of the problem was solved.

I also took time to clean the entire layout tracks. I didn't do that since the new track plan was implemented last spring. It may be evident, but less trackage means less maintenance. It was a matter of few minutes before everything was shining. No wonder real railways try to keep their network as simple as possible to keep maintenance cost at minimum. Another good reason to follow prototype practices.
Posted by Matthieu Lachance at 7:49 AM