I’m well-known in my architectural practice and layout design to advocate a “less is more” approach. While this could lead people to think I believe in doing minimalistic things, it doesn’t mean I’m supporting mediocrity for the sake of it or that I’m against any form of figurative art. On the contrary! But I’m always keep in mind to keep a balance in what I do following in that a mindset that goes, at least, back to Antiquity when such principles as “soliditas, commoditas et venustas” (solidity/strength, functionality and beauty) were seen as the attribute of a well-designed architectural endeavour. I truly believe it does apply to model railroading because, like architecture, it is an art medium which have a practical purpose, must stand the effect of time and abuse, and still be elegant

When I first design the benchwork, I tried to be pragmatic and didn’t see any purpose in making the foreground larger than required to keep rolling stock and locomotives from falling and meeting their demise on the floor. 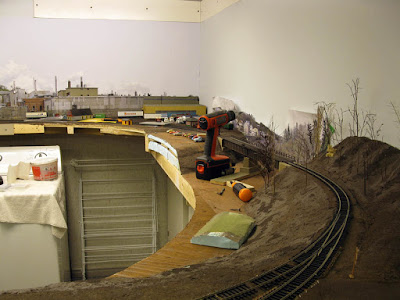 This was in part because many layout textbooks ingrained me with this “only model the right-of-way” approach and because I had very little experience in scene composition (which I’m learning as I build this layout). That approach isn’t bad in itself, but fail when you try to apply it to a larger layout in which scenery is part of the story you try to tell. 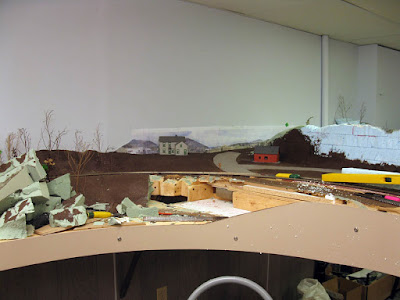 I can see it plainly with our layout. In D’Estimauville, Villeneuve and Donohue (industrial and switching areas), foreground doesn’t play a great role in defining the place and is somewhat a nuisance if too deep. 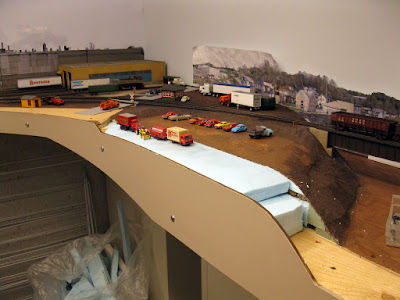 On the other hand, when you move to Charlevoix (mainly the peninsula), foreground helps to trick your eyes the track is following a large river and cliffs. As the layout was design, you had the impression the track was just following the fascia contour rather than the topography. It made the trains overwhelm the scene instead of being dwarfed by it. Anyway, all this is now a thing of the past since we enlarged the peninsula scenes by 6 inches while installing the  1/8" thick MDF fascia. 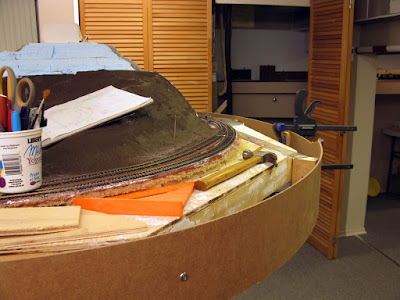 The existing fascia in Donohue and Rivière Malbaie area was moved and the scenes were extended accordingly. It means the river and parking lot are much more wide they used to be, which looks far better. 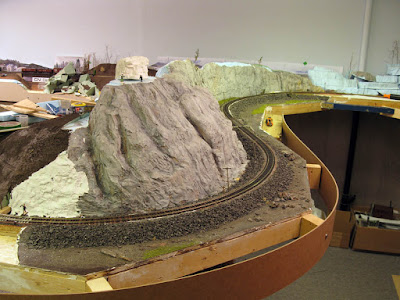 Among the big improvement are the area near Clermont grade crossing. The road used to run along a sharp cliff in the most unrealistic way. The same argument could also be used to describe the stretch of roadbed linking the yard with the railroad bridge. Addnd more depth to the benchwork there provided more room to make the road flow more naturally. I originally built the scene from memory, but when looking at actual pictures of the area, I quickly found out there was more land between the river and the track than I expected. Well, the brain is good at capturing the unusual features and making them memorable, but that cherrypicking isn't always a good thing we recreating a scene. At least, the area is now less dangerous if a derailment happen.

Finally, the last part of the layout that benefited from the benchwork improvement is the peninsula itself. I think pictures speak of themselves on how the scene now flows more realistically. This is in part because the shore is wider, but also because the fascia is no longer a set of angled MDF planks. The original geometric benchwork made pictures hard to frame. Worst, since the shore width varied from place to place because of the angled nature of the original fascia, the scene looked to be broken in many small vignette instead of a single large one. 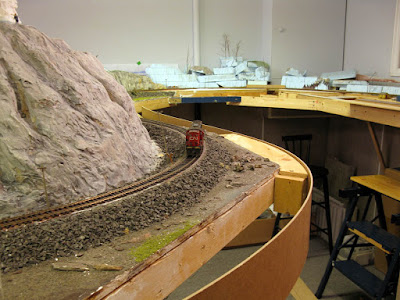 In the end, I believe adding substantial width to the foreground will pay a lot when doing scenery and was well worth the effort. So far, even without scenic material in place and benchwork full of holes, the improvement is already discernable. I can't wait to complete the fascia next session.

Posted by Matthieu Lachance at 6:19 PM