This modelling season is starting at a very slow pace for us isn’t it! But we are talking about a hobby and as seriously as we take it, this ain’t our main occupation. 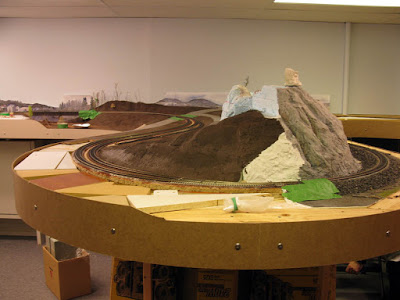 Nevertheless, work resumed last weekend and Louis-Marie was able to complete electricity adding long needed feeders to some sidings. This is the kind of invisible work that makes your layout more fun to operate. 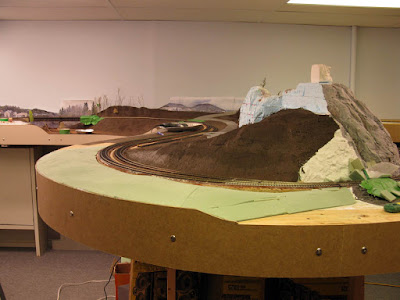 Meanwhile, I revised Ciment St-Laurent plans, making new scale drawings. I gave a few instructions to Louis-Marie about how to build the structure. Our main concern is to ensure it can be lifted easily to access tracks for maintenance and scenery. So far it should work, but I’m going to trust Louis-Marie in finding a more suitable way to materialize the concept. That won’t be a piece of cake. 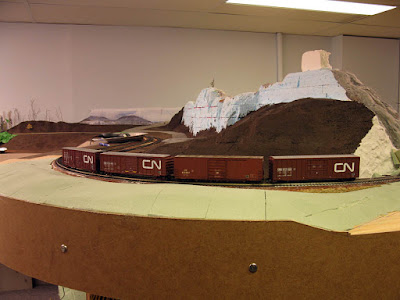 As for myself, I decided to work on Clermont once again. Since we enlarged the peninsula last spring, we focussed our efforts on Maizerets while waiting to find custom made turnouts. So far, we’ve been unlucky and decided to keep the track as is for the time being. If a generous soul has clue or a knack at making curved turnout, let me know. At this moment, I have enough on my plate and have no interest in scratchbuilding a mechanical device. It means the second siding is no longer viable and the propane dealeriIs going to become a team track/feed mill as once envisioned. Space is at premium and we will try to find a way to cram a credible structure without overwhelming the scene. I’m looking forward doing that. 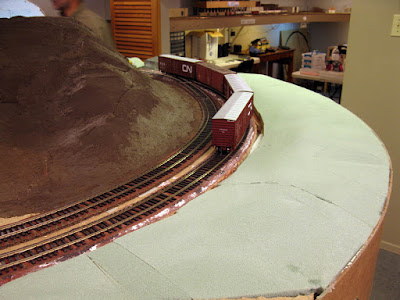 While all this sound hypothetical, some scenery work is under way and florist foam was used to terraform a fairly large area linking Clermont and St. Lawrence river. At this point, I made the new terrain slightly higher than the roadbed. In real life, it is the contrary, however, because of the sharp curve, it’s better to have surrounding grounds higher to hide that fact. Once trees will be planted, it should take a different look. 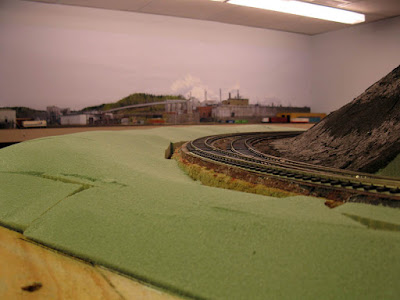 You will also find out this scene blends with the paper mill in the background. It was never planned, but I like the idea which as been masterfully explored by fellow modeller Rob Clark on his fictive Cornhill & Atherton Railroad layout. It is based on "shakkei", a Japanese word used to described the concept of "borrowed scenery". The idea is simple, for a layout, it means you use another scene as a backdrop from the foreground scene. In this case, the sky, hills and mill at Donohue merge into Clermont in such a way it creates the impression of a vast and realistic space.
Posted by Matthieu Lachance at 5:01 PM