Another session of grass application in Villeneuve went by last Thursday evening. The last stretch of ditches was completed up to D’Estimauville Avenue, helping to unify the vista all over the room. 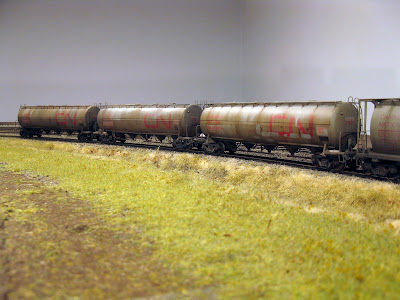 I also experimented with short and well-groom grass on flat areas. In the past, my attempts were clumsy and too contrasted to look credible. Yellow dead grass was applied right beside green one. This time, to get a more toned down look, I randomly mixed for grass colors together in the grass applicator. To make sure the grass would be randomized, I didn’t bother blending the color to much in the grass applicator. 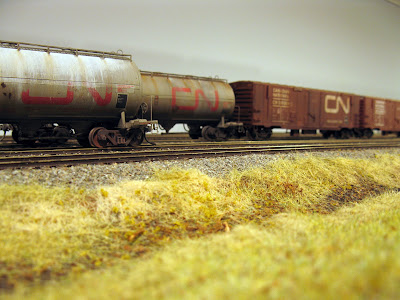 Also, instead of applying grass in one pass, I did it in three passes. I also made sure to add ground foam and leaves here and there to give relief and variability in grass height.  When color was too uniform or blended badly with the ditches, another specific pass was done on relevant spot. This randomness, a key feature of nature, ensured the very long stretch of grass wouldn’t look like a grass carpet. 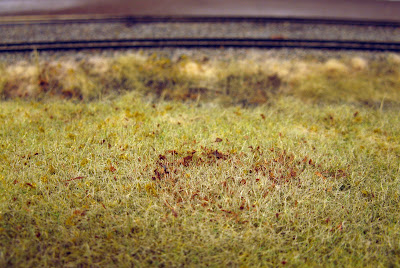 Later, small weeds, bushes and trees will be sparingly added to the scene for some extra variation. Looking back at my first experiments with grass in Clermont make them pale in comparison. I’ll certainly have to redo many parts here and there. 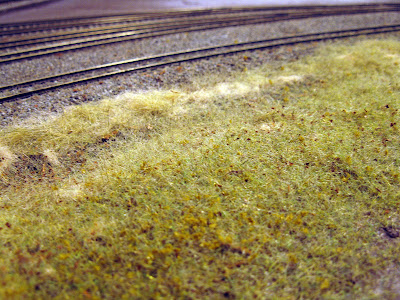 I also want to change the overall scene transition a little bit in Villeneuve as progress is made. Among the changes, I rescinded the parking lot in d’Estimauville, finding it a little bit a gimmick. I’m also seriously thinking about merging Maizerets into Villeneuve as a large and flowing scene. I’m not that much a fan of staging a train that reaches its destination while the caboose in still in stating. 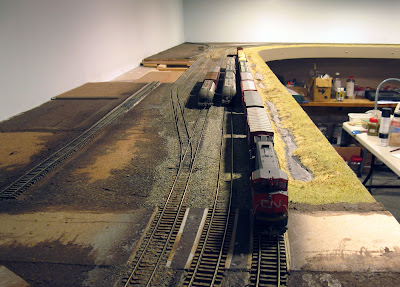 I’m not sure how I’ll do it, but with Jérôme, we have started to analyze some spots along the line in Villeneuve that could be suitable. Interestingly, a set of bridge similar to the one in Maizeret does exist not far from the cement plant. Also, I’d like to bring back a feature of my original design: a road parallel to the track just like the prototypical Boulevard Sainte-Anne that follow the line for at least 20 miles. Failing to show this feature seems to be missing a key element of Murray Bay Sudvision. If it wasn’t a matter of access, that road would have been modelled in front of the cement plant too. 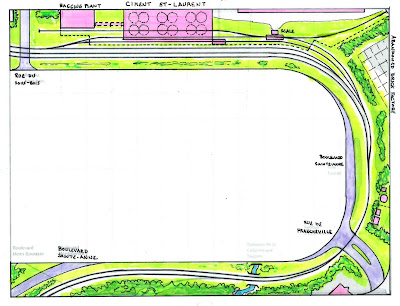 To be blunt, I’m getting sick of vignettes, cameos and other forced theatrical devices in layout planning. I’m not against any of them when they are used with parsimony, to bring life or to better capture the sense of a prototype. However, constantly including references and “clins d’oeil” ends up like a botched Hollywood movie in which every trick of the trade must be put on film as if it was shouting “hey, it’s ME!!!!”… Murray Bay Subdivision is too much a simple place to start adding more stuff around. At some point, you break the suspension of disbelief. And mark my words, I’m starting to think the diesel era modelling has far less room in that regard. Steam era infrastructure was extent and everywhere. Every mile, every location, had its bunch of stuff laying around. However, in modern time, railway infrastructure had been greatly streamlined and reduced while trains got longer. If you continue to add stuff mindlessly, you quickly depart from that feeling of vast and somewhat empty space, particularly for main lines and branch lines.

So, bottom of the barrel, since our layout is nothing more than a magnified shelf switching layout, I'm starting to think each room should be treated as one large location instead of a collection of loosely tied together scenes. Most people will scream "Oh no!" but personally, it makes more sense and I feel I'm not trying to cheat myself with nonsensical geography.

Posted by Matthieu Lachance at 7:59 PM