Applying static grass has become a leitmotiv recently. It's probably the reason why my posting rate dropped. Hard to bring up new topic when all you do is the same old stuff again and again. Yet, as boring as it may sound, this crucial step brings life to the layout as never before. 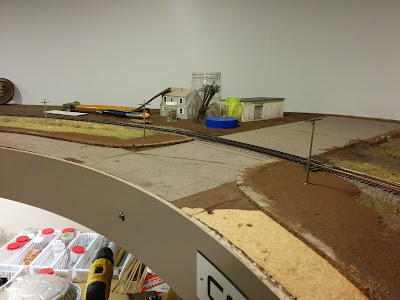 I recently talked about slightly changing D'Estimauville avenue for something more down to earth. Well, I built the foundation for the new road and new grade crossin
g. But thinking about it now. I'm not so sure it was a great idea. This is one of these case when you must take a break, sit back and relax before you can better assess the result. 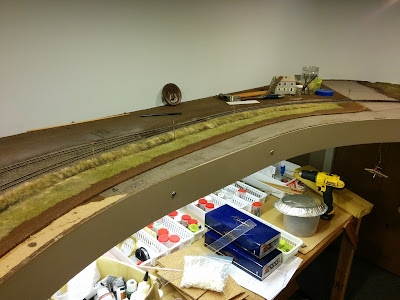 Don't get me wrong, the new road looks nice. However, it seems it lacks punch. And to be honest, while I criticized my previous concept as a little bit far fetched, I must say the new one share the same flaw. So don't be surprised if I revert back to simply doing D'Estimauville Avenue. I can already hear Jérôme laughing in my back and saying "I told you!" Oh well... I'll never learn the lesson, I shoudl trust him more. 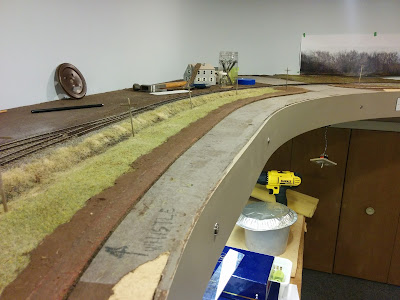 On a more positive way, Jérôme operated the layout from Clermont to Québec instead of Québec to Clermont as Chemin de fer Charlevoix used to do. He found out interesting stuff. First, the actual trackage in Clermont is quite enough  to handle the traffic. It seems the siding is less prone to be filled up when operating that way.

Also, we ordered a few Walthers CN insulated boxcars for the cement plant. They aren't 100% accurate but sufficiently to be better than my Bachmann kitbashes. However, that doesn't mean I won't improve the details a little bit more. We also ordered a few more bulkhead flatcar to better handle the lumber traffic that was typical on Murray Bay. It also means a lot of cars will soon be obsolete and I'm thinking about selling a few of them later.
Posted by Matthieu Lachance at 8:15 PM