I wasn't active as much as I wish I could be during the last month. We are still struggling to implement DCC, sound and lighting in a few locomotive projects and it took a toll on our motivation to a certain point.

However, the S2 project is going forward. I did had my doubts about some aspects of this project, but fortunately, a kind soul provided a few hints that were sufficient enough to move the road block in front of me. 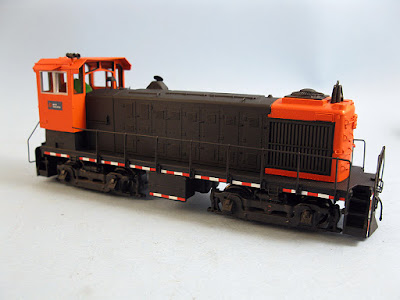 I was inspired to take a few extra steps, including a reconstruction of the pilots and replacing the truck sideframes with correct ones. I also put my sanity to the test by trying to replicate the Abitibi Consolidated sticker on the cab. The words had to be pieced together from generic locomotive text lifted from a Microscale Set. By example, Abitibi was made by using groups of letters from a word such as "Prohibited". The red logo had to be handpainted. It is less than 2mm in diameter, barely noticeable. But I felt I had to add this little detail to do justice to the model. 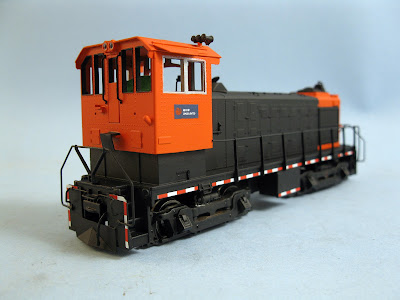 The truck sideframes were from an old tooling Atlas S2. They aren't compatible with new Atlas S2 locomotive and I had to drill holes so wheel axles could fit, then added a pin made from a styrene sprue to secure the sideframe into the truck assembly. I've yet to decide how I'll secure the sideframes semi-permanently. Probably some kind of glue.

Now, it's time to weather this little locomotive and do the final reassembly. The rotating beacon will also be functional. A small pico LED should do the job.
Posted by Matthieu Lachance at 6:16 PM