It seems to me not so long ago I wrote about terraforming Clermont... both here we are again, doing it for a second time.


This time, it is going quite faster since we know what we are doing and all club members are actively participating in a manner or another in the process.


As you can surmise, last Saturday, we started the day by studying photographs taken last year and from there, we were able to draw on the plywood the various landform to replicate. We were quite bold in determining the size of the small valley and I'm curious to see how it will turn out. However, I believe the scene unusual depth in this part of the layout won't be bad at all.


While I'd like to make you believe this process is going straitghforward, I prefer to tell the truth behind this process. After a long day of work, we took a step back and tried to assess our progress. While some parts are genuinely close to the prototype, it became quickly clear our hillside profile was somewhat wrong. After a few inches of height, the slope should start to become gentler (about 35 degrees) until it reaches the summit. Unfortunately for us, we made the hill ridge a little bit shallow which means we will have to enlarge it of a few inches more if we want our summit to stay at the same height. No big deal, but we feel it must be addressed before moving forward with scenery.

The summit height has also a big implication on how we perceive the scenes together. The previous mountain was high enough to hide the tracks on the other side of the peninsula. However, this is no longer the case with a 6" summit (about 40ft in real life) and we will have to rely on vegetation to get another 6 inches in height.


To make sure it would work, we created a mockup forest reusing old twigs and supertrees from the previous scene. However, this time we tried - as best as we could - to get the tree density right. On most layout, this is overlooked quite a bit because trees have leaves. In our case, we need an opaque screen of leafless branches.

To get the effect right, we played on several parameters. First, the tree density which is a 3/8" (3 feet) spacing between trunks. It may seems overkill, but dead twigs are free and plenty. When painted the right color, they can help to fill a lot of ground. 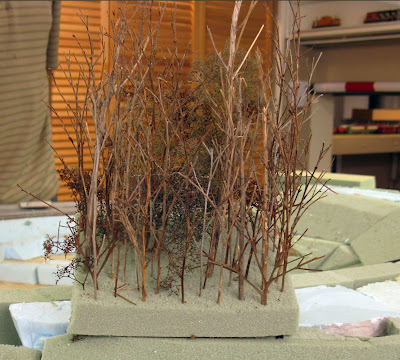 Second, a few supertrees are mixed within the forest to create a denser core of branches. Supertrees' fine branches work wonders in that regard, including bushes and smaller growth. When planting trees, we will have to create several layers of various types of trees and it will be important to make sure they are planted in a realistic manner.

Third, depth. By depth litterally mean scene depth. Our mockup is about 4 inches deep and is already almost opaque. This means tree density will vary depending on location. Basically, vegetation on the ridged (where the forest depth is shallow) will be quite dense, but in the valley, it will be significantly reduced.

Fourth is color. Some twigs were already painted light gray while others were plain natural brown. Brown looks unrealistic for tree bark while gray looks far better, idem for supertrees fine branches. Another interesting point is that light gray is a light color. It makes elements look bigger and denser because it scatters more light. Thus, this is a perfect color to create an optical illusion of density.

I'm well aware covering about 20 square feets with so many twigs is ridiculous, but as previously mentionned, we have many parameters to finetune the results without losing sanity. Also, it is quite a relief to think these trees requires on very limited preparation (some trimming, Modge Podge treatment, painting and planting).

However, as Jérôme rightfully remarked, a few very well done trees will still be required to make the forest pop up a little bit. It includes a few conifers (I'll show you in a future post how I made a quick and cheap Eastern pine tree mockup) and a few larger deciduous trees near the track. The goal is now to create a multicolored patchwork, but rather a subtle variation in colors and textures with some elements bringing life to the composition.
Posted by Matthieu Lachance at 8:45 AM