Gone with the Wind... 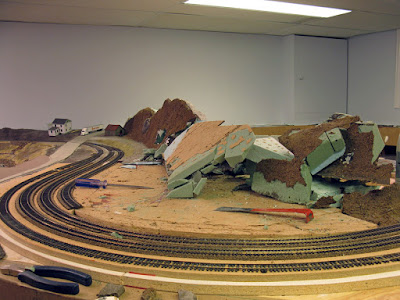 Last Saturday, we cleared all the remaining obstacles impeding Clermont yard reconstruction, i.e. the mountain. I didn't shed a tear and neither my fellow club members. Meanwhile, Julien and André-Pierre paid us a visit and probably didn't expect to see the layout in such a state. I'm pretty sure they thought to themselves we were absolutely crazy! We will see... they may be right, maybe not!


That huge mountain was a neat scenery feat back in the early 2010s when we built it, but it looked out of place. Several times, we removed layers and cliffs to make it looks more natural to no avail. At the end of the day, we reach that point when keeping it was the proverbial incarnation of diminishing returns. One hour later, the entire peninsula scenery work was ripped off. Only the largest chunk of costly florist foams were salvaged for future use.


From this point, we quickly sketched the new topographic features on the plywood. We will have to reinterpret Clermont landforms to better fit our space. While our yard is exactly the same lenght as the prototype, it doesn't mean locating the small brook in the exact spot will look right. However, I'm pretty confident it should look quite good and the scene will have more visual depth than before.


The yard roadbed shoulders have also started taking shape. They were made from pre-shaped foam blocks following a 1:2 slope as seen on old CNR roadbed section drawings. It makes for a much more natural look than the previous 1:1 slope we used everywhere else.


Finally, a nice diner with friends followed a productive day. We were all left wondering what expect from Canadian National's centennial celebrations. It certainly don't look like it will be a blast at this point, but the year is only starting.
Posted by Matthieu Lachance at 5:14 PM