A recent surge in layout planning due the hobby room being almost completed lead me to resurrect my old layout concept about a derelict CP branchline in Southern Quebec during the 1980s.

This time, Stanbridge subdivision running for about twelve miles south from Farnham to Bedford and Stanbridge Station caught my attention. For once, without distorting reality, I was able to find a prototype branchline that handled all the freight I wanted, provided the possibility to fully replicate the railway operation and having mundane yet interesting "railroady" details.

Since last weekend was long due to Canada Day, I proposed to Louis-Marie to make an impromptu railfanning trip to Farnham area. He jokingly suggested to bring my passport in case we would want to railfan further in the United States... Little did I know I would venture into Marty McGuirk's territory and railfan some parts of Richford! Now I know why he choosed such a fabulous area!

Here's the full rendition of this railfanning trip (part 1) and the possible implications for a future layout. 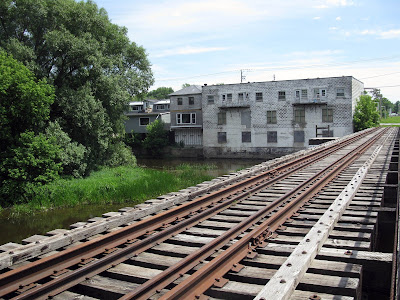 To be noted, I'm on the hunt for information and photos of Stanbridge Subdivision. It can be trains, locomotives, structures, depots, industries, etc... I highly suspect RS3 and RS18 were used as motive power.

So far, I've been able to locate a few pictures at BAnQ, but not enough to go forward!
Posted by Matthieu Lachance at 1:31 PM