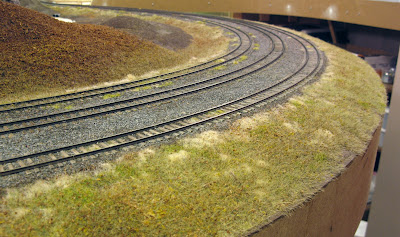 Hard to believe one year has passed since we took the bold yet courageous decision to rebuild Clermont yard from scratch. While it seemed it would be a straightforward project to be completed before Christmas 2018, we didn't meet that unrealistic psychological deadline. We missed the target, but does it really matters? Rebuilding the peninsula was the right decision and ensure we got rid of less than perfect remnants from previous layouts. No room for complains. It is now time to scenic the area and bring it back to the state it was prior to rebuilding. 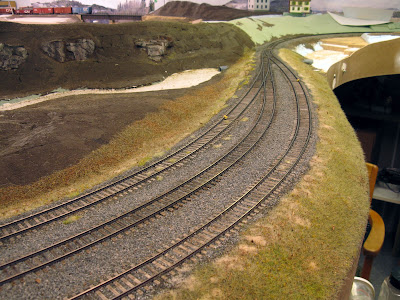 The first step is to cover the entire hill will grounded dead oak leaves, but unfortunately, I ran out of supplies faster than I thought. It thus forced me to scenic the grass embankments on both side of the yard. Since a road as yet to be modelled on the left side of the peninsula, I worked my way toward Wieland up to the small creek.

Working with photos, I thought it would be a good idea to continue using the recipe used in Villeneuve yard. Some consistency in colors won't hurt. Various length and color of static grass were used. At first, dead grass was applied by hand near the track because, most of the time, vegetation near the ballast is lacking in terms of green shades due to drainage. Then, my custom mix of green static grass was applied with an applicator to fill up the gaps. Grounded green foam and leaves were then sprinkled over the grass to add texture and color. This last step really brings a drastic change in appearance, adding a level of realism you can’t get with only using fiber material. Color variation, depth and texture all matter. 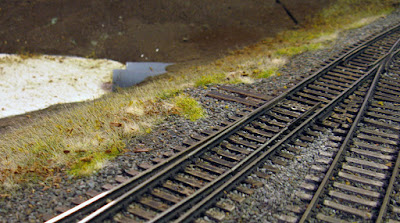 Small tuffs of grass were also added between ties on the sidings. I know many people like to use commercial or homemade tuffs, but I prefer to create mines directly on the layout. Jérôme think I could add much more vegetation between rails, but I prefer taking a safer approach and do it by step rather than exaggerate. Waiting next week to do is better.

So right now, about 8 feet of yard are now scenicked. Interestingly, the grass now make it appears narrower and longer, which is a good thing! I was counting on this optical illusion to make it look more realistic and I'm glad it worked out. I always see scenery as a way to reduce the visual impact of track so it can blend into the larger scene. 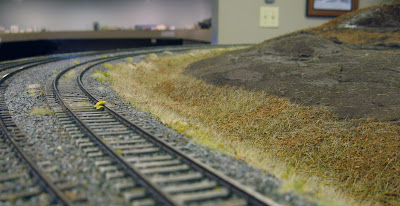 The next big challenge will be to model the tall dead plants typically found along the right of way. Pictures show large weeds about 2-3 feet high were common along the tracks in Clermont, even during spring. I tried using real plant parts, mainly the flowery ends, but I’m not convinced. I also have some commercial weeds, but they are quite costly and I need quite a substantial amount. However, I have recently found while gardening that weathered sisal rope looks like dead weeds in HO scale. When exposed to weather for a few months, it turns silver. I suspect this material, cut to length, would make terrific dead plants on a layout. I’m going to try and fibers start to desintegrate into smaller filaments. I will gather old sisal rope remnants from my garden and cut them to lenght.

Meanwhile, I’ll have to improve the creek bed which got covered in plaster with no so great results. I may have to remove this plaster all together and start from scratch. I feel I won’t like it if I keep it as it is. 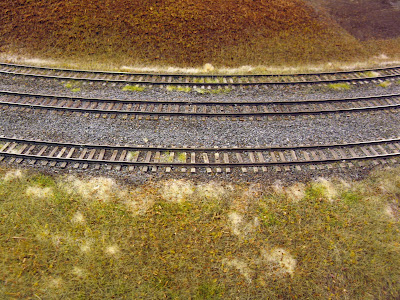 But all that said, I can't pass under silence what struck me the most yesterday when working on the layout. The lighting will apparently abundant is poor and the wrong color. I'm not sure exactly how we will address this issue, but it will have to be... I'm seriously thinking about using rail LED projectors so spice up the scenes and spotlights features. This could help to create areas of interest while guiding our eyes toward the action. Right now, everything it washed by a monotone bluish light that doesn't make our hard word looks good. It's a shame to put so much effort yet nullify it under a generic blanket of light that washes away every bit of relief and colors. 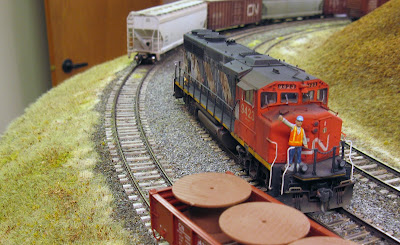 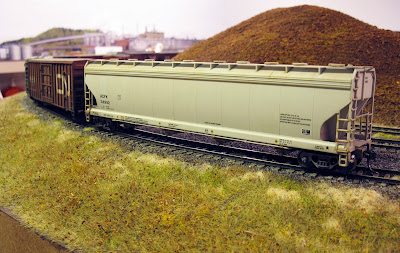 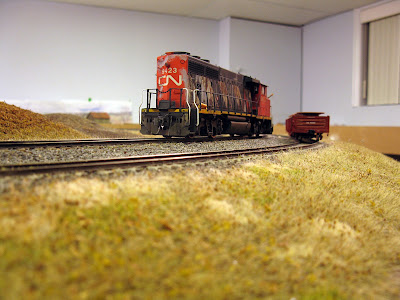 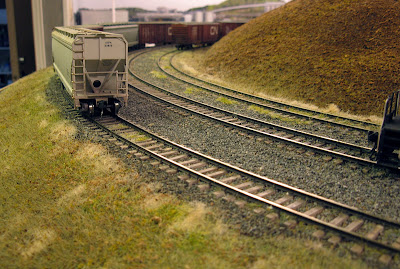 Posted by Matthieu Lachance at 6:46 PM