Railfanning: What Future for Jackman Station? 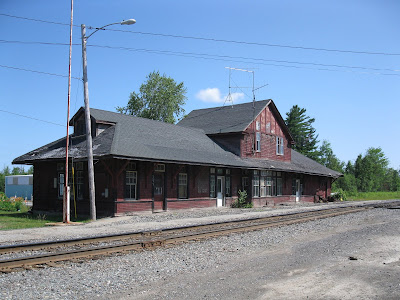 Last summer, I ventured into the United States for the first time in my life by visiting Northern Maine. Later, another 2-day trip around Maine brought me from Jackman to Brunswick then Rockland, Bangor and Moosehead Lake before going back to Quebec. It was a good occasion to see in real life the geography of places I’ve read about for decades and to get a better sense of the place. All in all, it was a quick yet fascinating exploration of New England railroads and architecture.

For this reason, I created a new category on this blog simply called "Railfanning" to group together these short trips. Since I'm not in the mood to create long post about travel, each post will cover a very specific subject and my musings about it...

Indeed, the first major railfanning spot was former CPR station in Jackman. This iconic building has been featured on countless photographs since the International of Maine was opened in the 1880s. While it survived for more than a century, the last few years have been rough for this abandoned structure left to the element.

Weathering is harsh, lack of heating destructive and the structure is slowly but certainly rotting away. With the recent destruction of Bodfish section house, I see no future for Jackman station as it is right now. Through broken glasses, it was possible to catch glimpses of former occupation, but the dire state of decrepitude shown there was no will to ever put this structure in function.

From an architectural point of view, Jackman station is indeed an interesting building with it second story with plastered gables. Not a common sight in the area yet very typical of CPR style of that era. While it could be salvaged, the restoration efforts would be colossal and costly. Decontamination is certainly required and several structural members are starting to give up due to rot. Even if efforts were spared to save it, what new purpose would it serves? Jackman isn’t a large town and given they already had to demolish significant historical buildings in the recent past shows the community hasn’t the vitality to support such a project.

CMQ has an attitude of keeping its property in good order and clean. Irrelevant and cumbersome artefacts are removed and I suspect the next structure to go down in history following Bodfish section house will be Jackman station. I’m not sure Omer Lavallée would be pleased with that, but as he once wrote about the demise of Quebec Railway Light & Power Co. in March 1959, cold hard facts don’t care about sentimentality and nostalgia.

Disclaimer: All pictures were shot from the station platform and interior photos are in fact taken from outside through broken windows. Trespassing property is forbidden and honestly, the decayed nature of this building is quite concerning in terms of structural integrity.

My advice would be enjoy the sight while it last, because the future is dark for this long appreciated icon of Maine railroading.
Posted by Matthieu Lachance at 12:24 PM