After  a few days, I thought it would be nice to try and see if the Avenue Industrielle layout could have aesthetic appeal given its sheer simplicity and strong horizontal composition. Working with well-defined benchwork dimension and insurance maps, I plotted the most optimal track plan I could think of.

Some compression was required, but so little it doesn’t really matter. However, the tracks were redrawn with a slight diagonal so I could reduce the length of the curved siding and get a longer straight piece of track in front of the produce warehouse. Not only it does provide a better track arrangement, but it does bring some life into a quite simplistic track plan.

However, these are basically technical and mechanical considerations. Would this layout look good and provide visual impact upon the viewer? That’s a good question. I believe the roundhouse and various sheds and offices would provide a neat transition at the end of the layout, hiding well the rest of the world we believe lies just beyond these buildings. The large sweeping curve with several warehouses, tanks and chain link fence would also provide a lot of visual appeal. Interestingly enough, this scene then transitions with the lumber yard were lumber piles and sheds create a scenic break before reaching the end of the layout.  In some way, there is a gradual building up of structure and density.

The lumber piles and sheds creates an interesting foreground element that hides momentarily the train before it makes its entrance in the last stretch of track which lies within an enclosed perimeter well-defined by the B-A oil warehouse, fences, the used car lot and the back of the lumber shed. 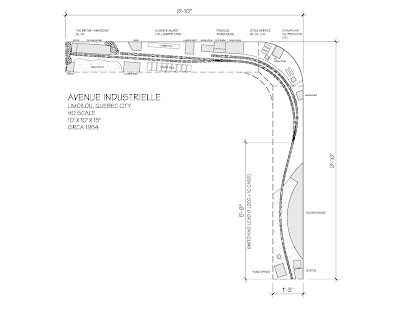 From an artistic point of view, I believe this layout has potential, however, several elements will have to be crafted with care. First, the backdrop will truly bring life and perspective. Second, the foreground between the roundhouse and the lumber yard should be carefully made, including slightly variation in terrain, mud patches and debris indicating the industrial waste nature of the site. Playing with topography should create the impression the train travels unstructured areas. Some visual code could be implemented, meaning level areas with tracks are active and rail-served while unattended mild depressions in the ground indicate wasteland. That way, I believe, it will be possible to create a story of a train leaving the yard and travelling a few hundred feet to reach an industrial spur.

The last composition element would be verticality. All structures are extremely vertical, with the roundhouse being the largest and tallest. None had large smoke stacks or similar accessoires, meaning vertical elements will be provided by utility poles and a few trees. In some case, one could add a large brick smokestack to the roundhouse, but  I feel it wouldn’t be very realistic. Maybe a steel water tower could be a possibility too, but even then, it would look contrived.

All these observations means that such a minimalist layout should first get a scale mockup to see how element works together. Interestingly enough, the East Angus layout wouldn’t require such a mockup because it is already quite theatrical. But that said, I firmly believe framing the layout with IKEA cabinets would indeed create an already strong context within which a simpler layout could find its way.

By the way, I read this morning in an old publication CNR used 0-8-0 switchers in Limoilou... Good to know!
Posted by Matthieu Lachance at 12:07 PM