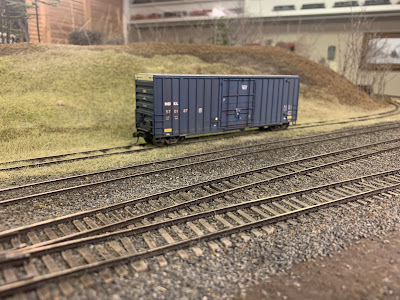 Posting hasn't been regular lately due to health issues and other activities taking a good chunk of my time. However, it doesn't mean I haven't been doing modelling, only lacking motivation to write about it. 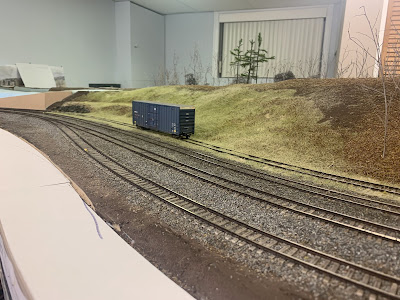 This week, I've completed the weathering on three custom painted Walthers 50ft Gunderson Boxcar. Blue NOKL cars were a staple on Charlevoix Railway in the 2000s and I felt I absolutely required a few of them to get a much closer impression of that railway. 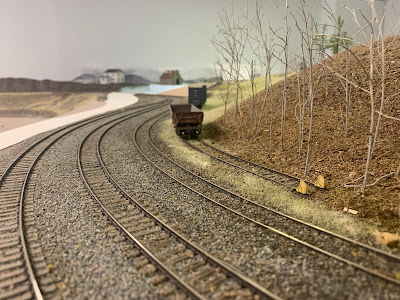 I had a hard time findign suitable decals and finally decided to use Microscale 60ft Gunderson boxcar ones. Yes, 60ft, not 50ft. Basically, it is exactly the same lattering, except for obvious large capacity and dimensional data. But since these are extremely small, I thought I wouldn't even notice the discrepancy under close inspection without a magnifying glass. Sometimes you must accept compromises, I was ready to use the wrong decals in this case.That said, it resulted in a nice bunch of plain jane boxcar for newsprint service. 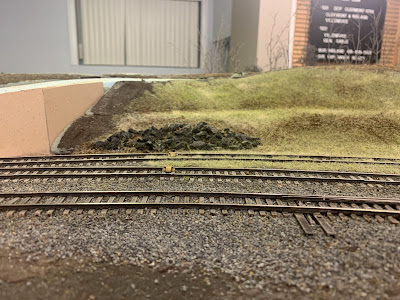 We also started to work again on scenery in Clermont, near the village. It is due time to scenic the last third of the yard and thus I put our good old static grass applicator in action. Working with prototype pictures of the area, I tried replicating the pattern of grass, dead leaves, granit embankment and other such features as the buried siding. I kind of like how the end of the siding blends into the scenery just like in real life. 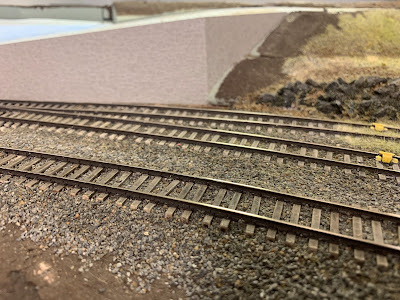 It was also time to model the stone retaining wall. This signature element puzzled me for quite a while. Most commercial embossed sheets are not correct for this particular wall. I could also use printed picture of the real thing, which would be the best option, but it would require me to go to Clermont to shoot the wall during winter. I then elected to simply scribe the stone pattern on thick illustration board using a rounded finishing wall in a pinvise. Surprisingly, it worked quite well and I'm genuinely impressed by the results. Only need some painting and weathering at this point. Also, I cut a groove in the back where the wall change direction, thus I can fold the board without loosing the stone pattern continuity. More on that project later! 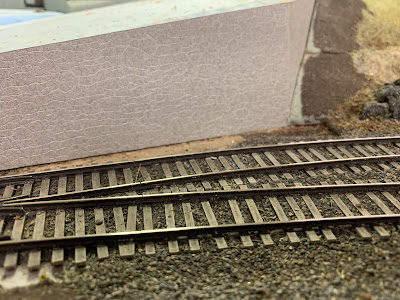 Edit: Many asked me who makes the derails. It is GLX Scale Models. Two options are available; with ties for new trackwork or without ties when installing them on existing track. They need some cleanup to work flawlessly, but otherwise, they are very nice details.
Posted by Matthieu Lachance at 7:50 AM