The Dark Side of Industrial Avenue

Another day and another time for layout design.

As regular readers know, I’ve built a small switching layout a few months ago for my office room. The idea was to get some train running and experiment a little bit. While I’ve been too busy to switch cars since Christmas, I also took time to analyze what I had in front of my eyes. Pros and cons started to become clearer and it is now time to see how I can improve this layout a little bit by taking into account my recent observations.

First, I noticed I seemingly despise runarounds. For some reason, they get on my nerve and I feel I’m wasting time when dealing with them. I can hardly see fun doing such a thing with diesel locomotives and reversing a train only to switch a car in the opposite direction seems absolutely inefficient to me! I know some will argue they add “interest” and maybe they are right. But that kind of “interest” isn’t for me. I take much more pleasure at looking at flowing tracks than complicated ones.

That said, originally, the layout was based on a British gentleman’s own switching layout. I simply transplanted his track plan on my baseboard. He used 5 turnouts to create a runaround track, two main sidings (a feed mill and a warehouse) and a team track on the opposite side handling about 2 cars. All in all, 5 turnouts and 8 car spots. Not too bad, but I felt I could do a better job.

When operating last weekend, I simply felt the opposite-facing team track was unpractical. I felt the railway would have repurposed the runaround as a team track and got rid of the turnout. At this point, even one could question the very existence of one turnout on the runaround track if you don’t need to reverse the train. It would bring down the total number of turnouts to three.

But even then, I felt the feed mill and warehouse could share the same siding instead of wasting a turnout for nothing. It would make life easier. I was thus down to two turnouts and kept the same number of car spots (in fact, more car spots) while providing interesting classification work instead of shuffling cars into their siding without an afterthought.

While discussing this matter with Jérôme, he pointed out the layout was quite similar to an industrial branch in Limoilou that served industries on the East side of Avenue Industrielle.
This small spur connect to Murray Bay Subdivision under the highway bridge (which I incidentally once modelled), cross a power line (which I also modelled in the past) and serves a specialty paper plant called Glassine Canada and a long team track and several warehouses handling produce and building materials. Honestly, a perfect blend of cars. Better, at the end of Glassine Canada, until the late 2000s, you could still see old 40ft rotting boxcars in CNR Maple Leaf scheme and CP Rail Multimark bright colors rusting and serving as permanent storage.

Interestingly enough, this would require only one turnout. But in fact, a second very short track served Glassine Canada and provided unloading for tank cars. An old 1970s aerial picture shows an attractive acid tank car in a red-orange paint scheme, probably a Hooker tank car from Niagara Falls. 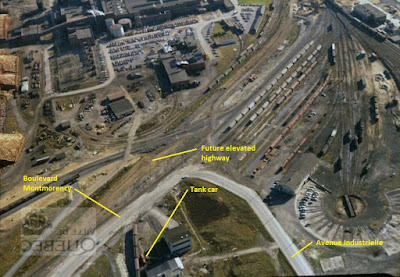 Given I have all the cars required and already have built a handsome model of the highway, creating this layout would be quite straightforward while providing a modern (1970s-1990s) prototype-based theme fitting well my taste.

Interestingly enough too, Glassine Canada offers another neat small paper mill than can easily be modelled. They received chemicals and paper pulp in boxcars, but also some additives. It wouldn’t be farfetched to believe some covered hoppers would also be used to haul starch used to make glassine paper.

The produce warehouse means various reefers and insulated boxcars from all over North America can be used. Given the layout would be set into the per diem era, it would be quite colorful. Finally, the team track could handle virtually anything.

Given the sheer simplicity of this design combined with its fidelity to real life operations, I feel it could make for a great little switching layout that would be fun to build but also visually appealing. Most tracks were buried in dirt, old ballast, mud and grass, making for a great scenery challenge.

Posted by Matthieu Lachance at 7:56 AM