Over the last few months, I've been rebuilding and repainting a series of hi-cube and regular boxcars. Nothing fancy, but I tried to be as prototypical as I could, following era pictures. Certainly, these models aren't 100% accurate, but it wasn't my goal either.

Among them was this Atlas 50ft boxcar bought from a dissatified friend. It was one of these boxcar with the inverted Ontario trillium logo. CN had a few of them, so it wasn't hard to repaint to fit my fleet. 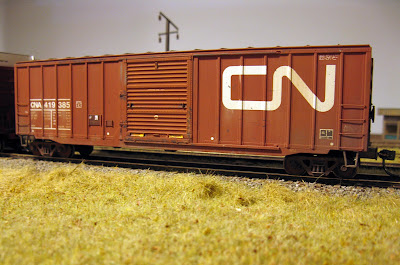 The other one was a NOKL LBF hi-cube boxcar. Not a great model, but the paint scheme was accurate. I decided to shave off a few molded on details and replace them with correct ladders and door hardware. A lot of work, but make some difference. 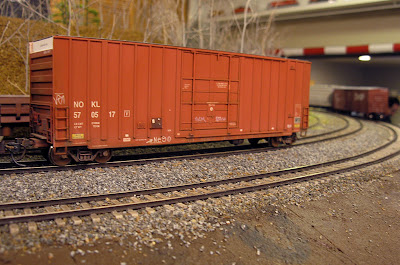 This one is a Wisconsin Central hi-cube boxcar. As always, Walthers got the paint color wrong and I had a field day trying to modulate it back to what it should be. However, I experimented with color pencils and also scratched the weathering with a blade to expose fresh paint. I found out the same happened on the prototype due to the door scrapping the rib tops. 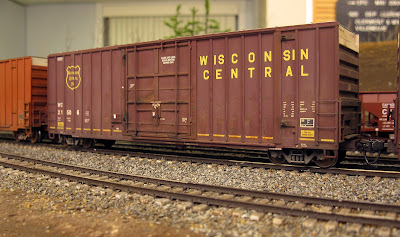 With these cheap cars, I often think adding texture to the model bring out more realism. And by texture, I don't mean rust-bucket but subtle variations in color. 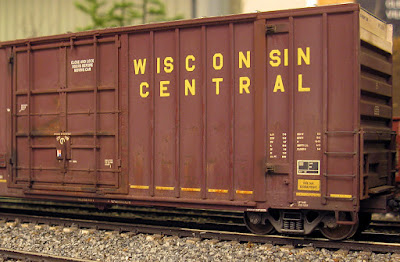 The last one was bought second-hand from a modeller that tried to weather it. It wasn't a success but I commend him from trying something. That said, when I discovered the weathering could be removed with alcohol I was thrilled.


Incidently, some weathering was kept in the crevices, bringing some shadows on the model which wasn't a bad thing. Then, using my airbrush, I added a color filter on the Walthers infamous chocolate brown infamous CN paint. The effect was amplified with Panpastel, then sealed. A fading coat helped to blend together the various effects, creating a result closer to the chalky appearance of these cars. 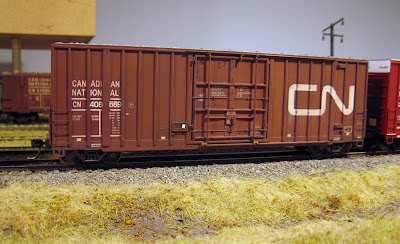 Posted by Matthieu Lachance at 10:24 AM