It seems respected modeller Jim Dufour really enjoyed my technique on modelling roads. Knowing how Jim's work is outstanding, I must admit I'm humbled by this. And he's lucky I've been working on other roads recently for our club layout.

Route 138 was the "mythical road" modern road that opened up Charlevoix to the rest of the province back in the 20th century. While the railway did help a bit in 1919, it was still slow and not that much of help for people that lived many miles away from it. As a modern 4-way highway, it was the achievement of a project that traces its roots back in the French Regime. Ultimately, that road proved fatal for the railway, stealing a lot of business and cutting the travel time of passenger in half, if not more.  Now, Quebec City was only 1 hour away from Baie-Saint-Paul and about 1.5 hour away from La Malbaie. Even under perfect condition, trains can't hardly take less than 3 hours due to the serpentine nature of the line imposing severe speed restriction. 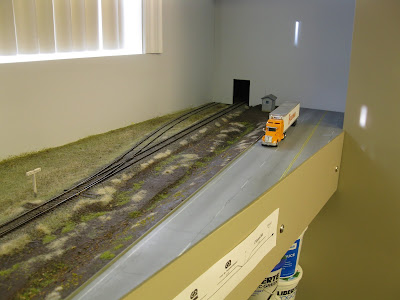 But well, as much as I can "despice" that dreaded road for having killed the train in the long term, it is a part of Murray Bay subdivision. The railway line and road stand side by side from Quebec City to Beaupré, then from Clermont to Pointe-au-Pic. From a railfan standpoint, everywhere both are parallel, you have a chance to see the train. Outside these area, you better be creative and plan your trip accordingly!

With that said, I can announce that road and a public utility shed have been successfully modelled and installed on the layout. These were the last items required before I can move on with the final steps of vegetation. As you can see in the pictures, the road is parallel to the track, but both are oblique to create a sense of dynamism in the scene. It is an old graphic trick to make a composition suggest speed and movement. I was curious if it would work with a layout and the answer is a resounding yes! I think this is another trick we can use to easily create more interesting scenes. 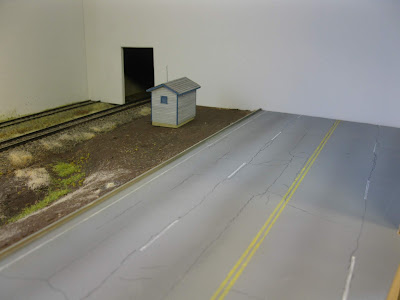 This time thought, instead of using illustration board, 1/8" thick MDF was used. Interestingly enough, it works as good as illustration board and takes paint very well. Painting and weathering was done with various spray paints and automotive primers (mainly grays and concrete) then weathered with airbrushed washes of a pale dirt colors followed by a subtle mist of very thinned down alcohol and India ink mix as Lance Mindheim used to recommend before switching to photos.

Road markings were defined with Tamiya tape after the road dried a few days. A this point, you don't want the tape to pull off your hard work. I worked carefully using Google Earth and Ministère des Transport du Québec (Quebec DOT) guidelines to make sure the width, length and pattern were accurate. Honestly, we underestimate the space between discontinued lines. It's about a ration of 1 part line, 2 parts empty space.

These lines were painted with a sponge. I think it works best and is less messy. Airbrush is also a good solution. If possible, weather you yellow with some white to make it a little bit faded.

I immediately removed the tape once done and using an Xacto blade, I started to scrape the fresh paint so it looked worn up. Theses lines, in North America (particularly in Canada and northern United States) never stay in good shape for long. Worst, most DOT have the habit of repainting them in late summer or fall, meaning they start to disappear the moment snow plows hit the roads. 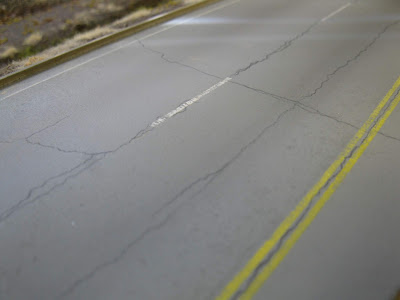 Don't fear scraping too much paint. In fact, I always find myself redoing it twice or thrice until I'm satisfied. Then, it time for black color pencil. Using again Google Street View, I planted myself in the middle of the road, exactly on the spot I'm modelling and studied the cracks in the asphalt. These are intricate patterns that aren't random at all. They follow the invisible joints when the pavement was applied by working crews and also how the loads from cars and trucks put stress on the road. Most cracks will be parallel with the road markings and define the lane. Others are right in the center of lanes while perpendicular ones seems to appear due to expansion and contraction of asphalt due to temperature variation. Be careful, study pictures and you'll be extremely pleased by what you will create. Just make sure you keep you pencil very sharp.

Once done, a good coat of Dullcote will seal everything and provide a rugged surface that survive abuse better than plaster roads which are a pain to build and paint without getting messy. Except how I paint these lines, I've invented nothing, but I feel this method yield better result because you can bring the road to the workbench, sit and take time to make it the best you can. Basically, you are treating your road with the same care you do with rolling stock and structure.

Given most people have a more comprehensive understanding of how roads look like than train, failing to address this particular modelling challenge is a major flaw. Can't go cheap with them. And honestly, getting decent results doesn't take that much effort. Once you've done one, the others are a breeze to create. In that regard, Louis-Marie surprised me by recently making the most complicated road on the layout which is more than 10 feet long and curves in all direction. More on that later thought!

Keep safe!
Posted by Matthieu Lachance at 8:31 AM