Sidewalks are often modelled with less regard than other elements of our layout. While some modellers will indeed pay attention to the details, scribing joints between concrete slabs or adding finely detailed curbs and manholes, I often feel the painting and weathering is quite plain.

Some of the top European modellers however will carefully weather their sidewalks until they get a very realistic look. I'm not at that level, but I thought it could be easy to level up my game in that regard.

After looking at various sidewalks in my area, it was evident snow plowing takes a serious toll on concrete structure, which is amplified by freeze and thaw cycle. A particular effect is the degradation of slab sides which start to delaminate. After a while, sizeable part of the surface is completely removed, exposing the aggregate. Also, the plow scraping creates whitish marks on the concrete sidewalks and granite curbs where the steel enter in contact with the surface. To be honest, I've never seen anybody modelling that commong pattern and decided I should. 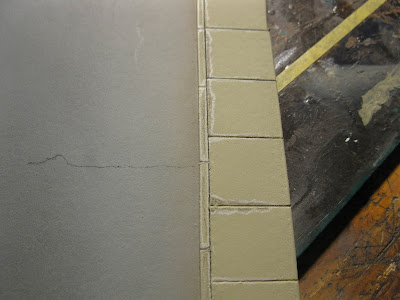 Many media could be used to render this particular weathering effect, but I felt color pencils were the right tool since they create granular lines similar to exposed aggregate. A brownish dark gray pencil was used to create the exfoliated concrete while a light gray pencil provided the whitish scraping marks. 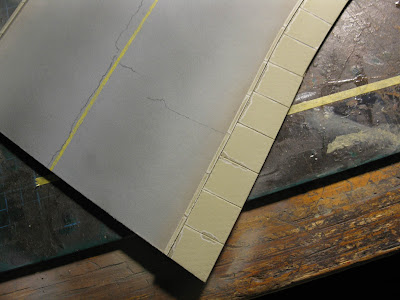 Pencils give you a lot of control over your work and that's their greatest quality as a dry medium compared to wet medium such as paint. I'm well aware someone could carve and sculpt the crumbling effects directly in the sidewalk material, particularly when dealing with larger scale. However, the pencils give quite a convincing effect without loosing your mind. Also, since my sidewalks are made of illustration board, carving them could create a fibrous surface which wouldn't look very realistic. If made of styrene or plaster, it would be another story. 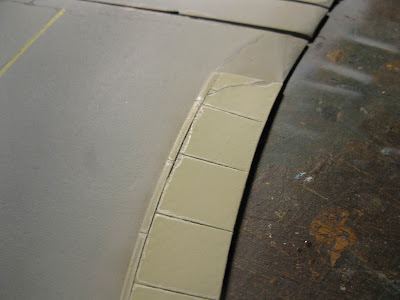 I also decided to use pencils to try to create the crumbling asphalt effect common on grade crossing where moving trains induce a stress into the pavement. This is relevant when modelling older grade crossing that weren't equipped with rubber plates. I'd say it is less convincing upon closer inspection than the sidewalks, but from a normal viewing distance, it works wonder. Once again, it is all about suggesting weathering pattern, as film makers and theater staffs would do it. We want an impression. 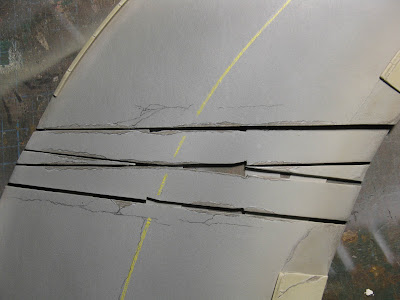 If you are interested in these techniques, I can only recommend Gordon Gravett's books on scenery published by White Swam in the UK. His "Modelling Grassland and Landscape Detailing" is worth every penny invested.
Posted by Matthieu Lachance at 9:12 AM