Work continues on the pair of SW.

The next step was to rework the cabs: I removed the side window details so I could plug later some Rapido's all-weather window. Some styrene stripes were used to narrow the window and to add new arm rests. Also, the molded on grabirons were replaced with phosphore-bronze wire. Miniature by Eric sturdy Sinclair antennas added and correct horns installed. New rain gutter/sunshade rail were crafted from modified Plastruct C-beam. Basically, I cut one wing to get a L-shape angle and sanded it down to size. I've done it on several other models with success and they provide a sturdy base to apply sunshade to. 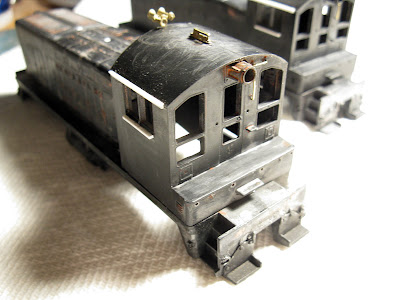 At this point, I stopped working on the cabs. I knew I would have more work to do later, but not knowing how to do it, I moved to the hoods. Since I didn't have correct switcher bells, Athearn's were kept but modified. The stock parts look like a steam era bell, so I trimmed them to fit better a diesel locomotive. Once trimmed, I cleaned the flashes and puttied the casting holes. 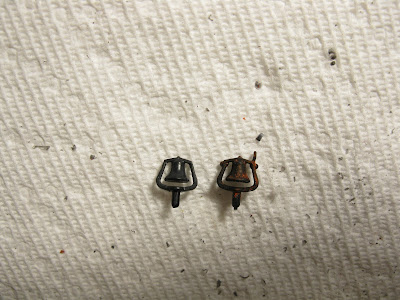 On the hood itself, I started to remove door louvers that didn't fit the prototypes and the handrail stanchions. The stacks were cut and filed down. Some holes had to be plugged with styrene to take into account the bell location was different on 7007. New square holes were also drilled so I could fit extra Rapido CN spark arrestor from my SW1200RS kit that I won't use. Luckily enough, out of three locomotives, only one was equipped with spark arrestors on CFC. These are beautifull casted parts, but they will require some cleanup to remove the mold seam lines. 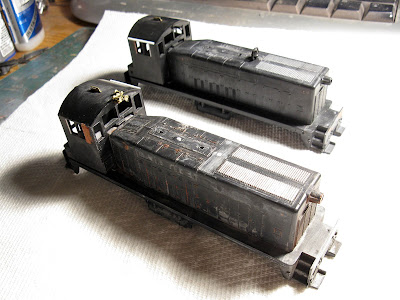 The next step was to modify the locomotive sills. Indeed, while the SW7 have steep angled metal sheet linking the staircases to the frame, CN SW9 and SW1200 have 45 degrees metal sheet there. My idea was to add some 1mm thick styrene there and, making a jig, to cut the shell and styrene in the right angle. It did work better than I thought, thus recreating a spotting feature on the prototype. 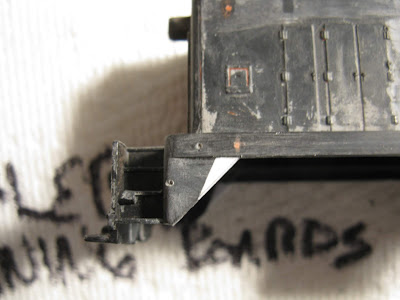 I figured out the molded overhang on Athearn sills didn't exist on the prototype, so I filed it down to get smooth-sided sills. Unfortunately, when I put on the cabs again, I found out they extended over the frame in a very unrealistic fashion. 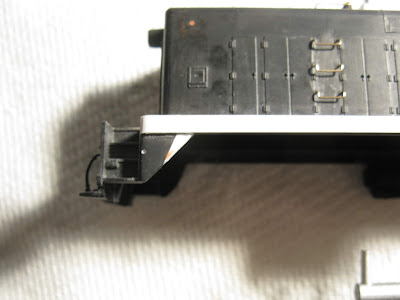 Thus, I had to cement a new layer of 0.25mm styrene sheet over the sills and sand down the ends. I had to be extremely careful while cemented this with solvent cement because it could warp the styrene surface badly. The styrene sheets were slightly larger than the sill, providing enough material to sand it down flush with the running board. It is often easier to get better result filing down material when in place than trying to figure out before hand the exact size. It also minimize the use of putty while providing a seamless surface between the old shell and the new styrene. 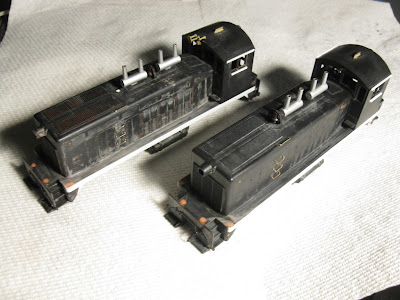 From there, I started to add the new hood grabirons, but I didn't foresee their location was absolutely wrong in comparison with the prototype. That would come to bite me later, but that, is another story for another time!
Posted by Matthieu Lachance at 7:39 PM