Generally, it is known among hobbyist that to get realistic structure foundations, you must embed them into the scenery. SOme with use sealed MDF, styrene, wood stripes or any other suitable material to lay a footprint and build scenery around it. Basically, it is the most efficient way to get buildings that look to be really part of the layout. Fellow Ontarian modeller Stephen Gardiner is recently experimenting extensively with this method with his excellent Liberty Village layout. I had the chance to visit Stephen's layout back in early February this year and you can now follow his progresses in the recommended website list. More on his compact yet fascinating layout in a future post.

Basically, this method is excellent when working with structures with a foundation and a superstructure. However, what do you do when your human element doesn't have a dichotomy of materials? Such as a concrete highway overpass. Depending on your prototype, you may not be able to create a separate foundation. Worst, you don't want any obvious gap between the model and the scenery. And as much as possible, your structure should stay separate and movable for maintenance and scenery work. 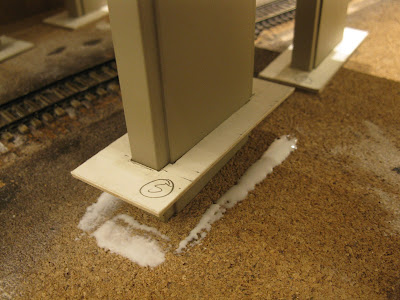 My suggestion is simply to create a negative foundation; slots in the scenery in which the structure will nest itself into, laying below the ground surface and hiding any possible gap between both elements. I decided to test the idea with the Glassine Canada diorama I'm actually building in my hobby room. 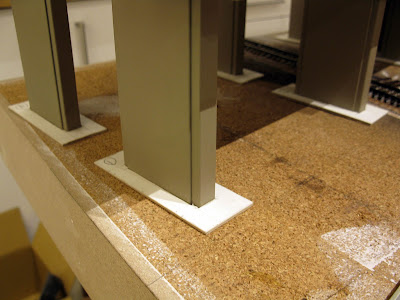 Using illustration board, I created a series of plank with a hole fitting each overpass pillar. They are snug enough to fit without leaving obvious gap, but they should also allow the structure to slide without effort into them. 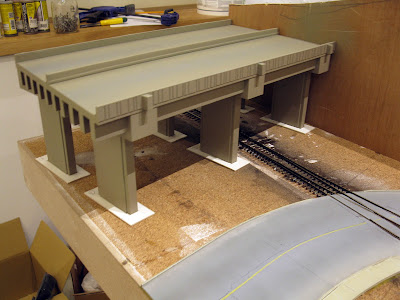 Then, I laid them on the layout and installed the overpass. When everything was aligned as wished, I glued the cardboard parts into place. When dry, I removed the overpass and was left with a series of perfectly located holes. I must admit I feared the illustration board would swell with all that water and applied a bead of carpenter's yellow glue on the perimeter of each cardboard element to seal it. 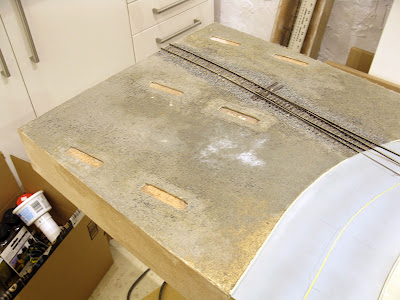 Sculptamold was used to blend the new negative foundations with surrounding ground. While still wet, a first layer of gravel, limestone powder and fine sand was applied and glued down with alcohol and diluted white glue. 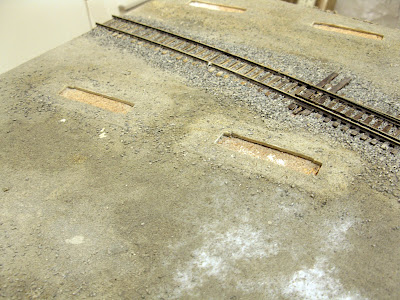 Once dry, it was time to test if the overpass would fit again in the hole. Answer? Yes! And it's realistic as can be. I've been convinced this is a viable technique and will use it again for the main building featured on that layout. 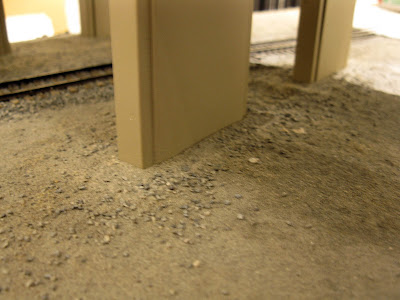 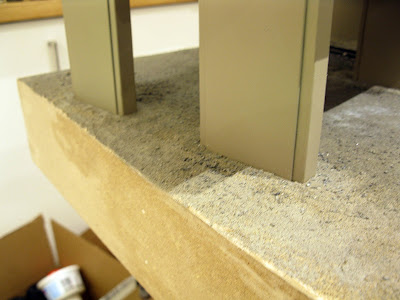 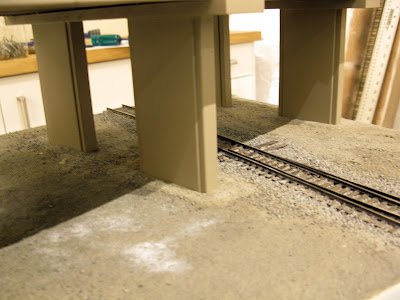 Posted by Matthieu Lachance at 10:35 AM