Through my limited interaction with 3D printing over the last few years, I've come to realize this technology wasn't a panacea to all the ills of modelling, but rather a tool. And like any tool, it comes with a set of possibilities and another of limitation. It's all about mastering the skill if you want to succeed, and to be honest, I'm not there yet. However, I have started using a friend's 3D printer and having to set the printing parameters, model orientation and add supports is quite a steep learning. It's something I wanted to avoid at all cost, but at some point, you do it yourself or nothing will ever happen, just like kitbashing.

Another game changer is how printing volumes have increased with new generation printers like Elegoo Saturn and Anycubic Photon Mono S. We've reached the point it's possible to print very long freight cars without requiring to break them into small parts. In my eyes, this is a big improvement. As uou have probably read when I assembled the woodchip cars, using 3D printed panels wasn't great.

When I started modelling in 3D I did what most people do: I read the printing material limitation then foolishly tried to cram as much details I could, if possible using scale measurement, in a vain quest for ultimate prototypicalness. Unfortunately, I also hit a wall. Perfectly at scale details aren't always printing well, but worst, sometimes they print well but they cast so little shadow you barely see them. As crazy as it may sound, prototypical doesn't translate as realistic. Like art, you need to exaggerate a little bit some features to make them stand out and play their role. Knowing what must be "improved" isn't always easy, but at some point, after a few print, you start to understand that some hills aren't worth dying on. A good example are open cars like gondolas. You've got to choose what you can live with: a detailed undeframe or a permanent load because weight in resin models is a major issue.

On a positive note, I've found out I can now print excellent one-part models, including very fine and realistic ladders, brake chains, hooks and other intricate details. Funnily enough, it's like an Athearn blue box car with a few extra bits. And I won't fool you, it was my goal since these models are basically replacing Walthers 65ft gondola and will be used in operation. Nevertheless, they can be easily improved and detailed.

At this point, I'm experimenting with supports. A print need supports and they are key components for a quality and smooth print. However, they can leave pock marks and you want to reduce them or locate them where they won't be noticeable.

On my third gondola print, the supports were located inside the car as it was printed upside down. The reason is simple, the underframe details are supported by the floor as the car is printed. It ensures a very neat print, but I'm not a fan of patching support marks with putty on the car floor. I have a few options, use less supports, which would probably be advisable and maybe, try printing the car upside so the supports are on the underframe. It would make support removal easier and most pock marks wouldn't need to be repaired because they would be virtually invisible or buried under steel shots providing weight to the car. 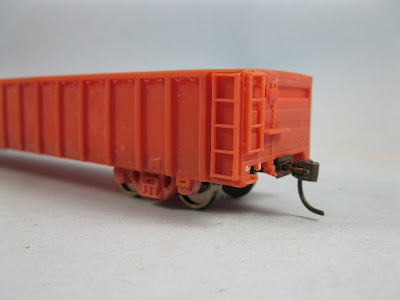 A last mistake was the trucks. Taking inspiration from trucks made in Delrin by manufacturers, I designed my own Barber S-2 70-ton trucks. I then proceeded to print several pairs, which is much more economical than ordering them. 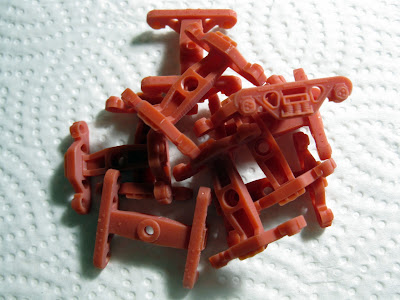 Unfortunately, while looking great, the bolsters were fragile and prone to snapping when installing wheels. A sturdier design with a solid bolster was implemented, making the resin strong enough to sustain normal abuse. It was a simple fix, but it proves your parts must survive the layout if you want the model to be a success and not a shelf queen.

Posted by Matthieu Lachance at 1:25 PM