With club meetings resuming since earlier this month, it is time to address the remaining bare plywood visible in Clermont. We have already started to work on the village scene which morphed back into the initial concept of a farm, however, I felt really bad about the dry Rivière Malbaie riverbed. It has been brown latex for years and its time to move forward.

Having the new backdrop in place makes it easier to find the correct colors for water. From what I can see, it's a complex patchwork of browns, dark greys and dirty bluish hues. It's not a gradient, like a lake or a calm river, but more splotchy and impetuous. Indeed, Rivière Malbaie has a strong current during spring.

Initially, my idea was to paint the riverbed and poor some Magic Water resin or other clear resin products. However, I feel it could be a real mess and I don't like techniques that require dealing with chemicals and wish the results will be great. I prefer to build up the effect at my pace with more forgiving methods.

Once such method is to paint the riverbed then cover it with several coat of gloss varnish and had waves using acrylic gel. It works well and I used it on various projects. However, I fear it would look right for a spring river. More experiments to be done, but more about it later...

The first step was to repaint the riverbed using latex interior paint. The first layer was a generous coat of dark brown all over the plywood to merged together the disparate materials. While the paint was still wet, I stippled and mixed dark gray paint in the middle of the river to create an illusion of depth. The paint was feathered into the brown and blended using a 2" brush. Rotating motions in the current direction created the illusion of moving waters. Once again, I used the backdrop photo to guide my efforts. 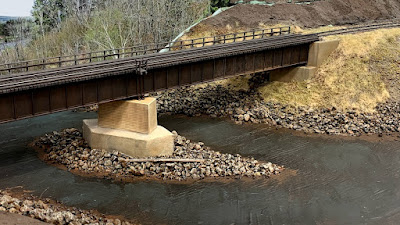 The last coat of paint, also wet blended, was a kind of dark turquoise bluish paint. In a few spots, I applied and mixed it to create variation. These spots, on the pictures, are generally near the crest of waves. It gives the impression the sky is reflected on the water. 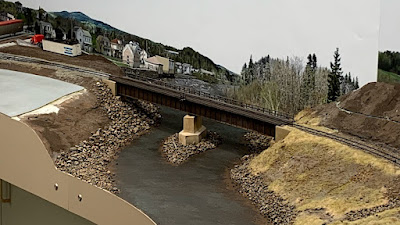 Then, I looked at the stone embankments. They were glued with PVA glue years ago and it made them look dark. It was unrealistic. Thus, I drybrushed them with a fan brush and a beige color. It blended together the stones by minimizing their extreme color variation. It looked better, but it was not enough. Using cream colored paint, I again drybrushed the stones, adding highlights. Now it did look much better. I also drybrushed the old tree trunk laying under the bridge. It gave it a natural bleached driftwood appearance. 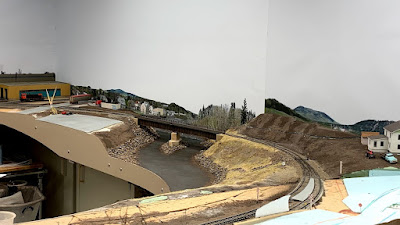 Lesson learned: using natural material such as stone is great, but you have to come back and alter the colors. First, because glue make them appear darker. Second, because interior layout lighting can't compete with sunlight and everything looks darker. Third, you need to blend the natural tones with a coherent and limited palette of colors on the layout.

As for the water, I don't believe gloss varnish will be enough to create an ondulating surface. Also, the plywood texture still shows through the paint. It looks unrealistic  and no coat of varnish will take care of it. It thus means I must fill these cracks and think about a new strategy.

I looked at various water techniques online and I feel the toilet paper soaked in diluted PVA glue should give the results I want. It is easy to apply, you have plenty of time to work with the paper to create realistic waves and no risk to ruin the layout with resin accident. Once it will be dry, I will paint it exactly like I did before because it looked great. Then, several coat of varnish, acrylic gel and drybrushed white paint will take care of the rest.

Posted by Matthieu Lachance at 10:22 AM