I recently made a list of incomplete projects on my shelves... It was both depressing and eye opening. I'm not believing it will affect my modelling habits, but at least I can say I'm all over the place, starting all kind of cool stuff and letting it die when a new shining thing capture my imagination. You see, I'm a modeller and it means that everytime I see something that catch my attention I want to model it or, more honestly, understand how it could be modelled... In my enthusiasm, often short lived, I then proceed without further notice to work on it.

Is it a bad thing? Probably? That much? Not very... But the big problem is that it takes time, resources and a lot of motivation. I don't mind modelling a little bit of everything. However, it's rather sad to see model trains never running. This is a big factor for demotivation.

With that said, you probably remember that a few years ago I acquired a bunch of cheap Bachmann diesel locomotives from Trainworld during a clearance sales. It was money I carefully put aside to pre-order a Rapido RS-18 which I obviously didn't. The model has been quite controversial at some point, but maybe the silver lining was that it provided me with a lot of quality modelling by searching for an alternative. These models stayed on my shelves for a long time gathering (real) dust and it was time to move forward. For some reason, I just can't understand what big hurdle I faced and that made me abandon these projects. Probably something trivial like not wanting to airbrush a coat of clear before final assembly! 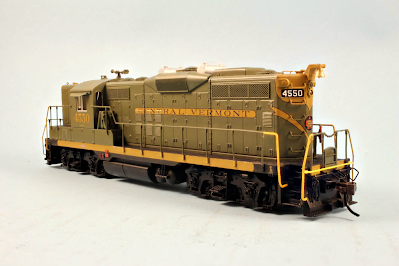 The first one I want to show is Central Vermont 4550 has it appeared in its original livery until the late 1970s. Looking at old pictures of the era, I am under the belief this locomotive was repainted in the 1970s in the old green scheme for some publicity purpose. Why? Because the paint was glossy, fresh and in good shape and the bell was highly polished brass when it should have been covered in paint under normal circumstances. Nevertheless, it's a beautiful classic locomotive from the 1950s and I wanted to model it. 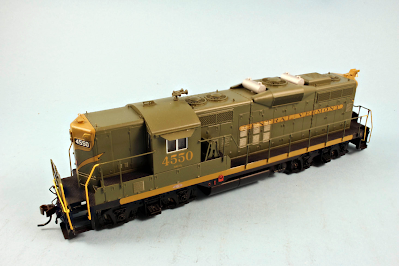 All I needed to do was to install the custom rerailers and bits here and there. Then, spray a coat of varnish before assembly. In good old days, I would have used dullcote or Tamiya flat base, but followed Hunter Hughson advice to give a try to Tamiya XF-35 satin clear thinned with Mr. Color Leveller. I must admit I really love how that finish give a painted metal look to a shell. Not shiny, just a nice smooth satin finish. Since I have no plan to weather that locomotive in the short terms, I felt it was the best course of action and I have no regret. I really recommend that finish and can't wait to apply it to steam locomotives.

I also used this locomotive to start experimenting with photostacking. Wow! What a difference when shooting models! I've yet to get better at it, but I already like what I see. The locomotive looks much more professional than before! 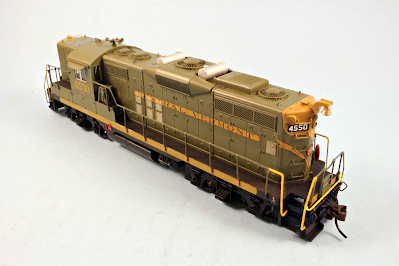 Now, what's my accessment of these cheap Bachmann projects? Well, it didn't cost a lot and I had a lot of fun, leaned a bunch about the prototypes and enjoyed trying new challenges. On the other hand, these are still DCC-ready models. I may have gotten them for a song, but if I ever intend to use them, I must invest almost $150 in each of them for DCC and sound. That's a lot if you ask me, particularly when you don't know if you're going to use them. I think the GP9 is a fine model, sturdy, well-engineered and worth the efforts if one improve the electric pickups. As for the S-2 models I will talk about in a future post, it's a mixed bag. The model itself is decent, but the cab rear windows aren't very great. It's a OK entry model, I'm not sure I would invest so much money on it if I can find a good Atlas model in good shape. In all honesty, I think if you can get a Bachmann DCC sound version at a good price, go for it. George Dutka did a great job with one he converted to Central Vermont. However, if you buy a DC model and want DCC then got for an Atlas, it will be more cost effective and you get a much nicer model, even if it's an old Kato one.

Posted by Matthieu Lachance at 1:26 PM