Being Creative with Brickwork

If you are like me, each time you look at a layout, you can't help but see the Walthers catalog right in front of your eyes. Indeed, this is a generalization since many kitbash and scratchbuild their own structures. However, what ever your opinion on the subject, commercial structures can be useful in many cases, particularly when dealing with brick building. Indeed, even if you kitbash them, a trained eye will tell quickly if it's DPM, Walthers, Vollmer or Revell to name only the most common ones.

One thing that can truly change their appearance is how we paint them. Different colors, texture and patterns can greatly disguise their origin, hide no so great splices and offer more character to the layout.

Over the last month, I've been experimenting quite extensively on brickwork and while I will probably do a more in-deep write up, here's a neat little trick I want to share.

From the 1880s up to the 1910s, architects and masons outdid themselves with brick patterns to create intricate and attractive motifs on facades. It was a period of prosperity at the crossroad of the industrial revolution and the traditional aesthetic canons. The two world wars would put a definitive end to these labor intensive and costly sophistications. "Plain" was the new way of showing off your wealth which would lead notorious architect Philipp Johnson to say: "Less is Bore" as a reaction to the more famous "Less is More"! I'll leave that counter productive yet fascinating debate for another time!

In Quebec City, this tendency was even more important as the city tried to create a new romantic international image to attract tourism. This obsession with anything castle-like would merge with the Second Empire style and many other American trends into a very eclectic blend that percolated from Government buildings to sheds.

It was also an era when it was particularly fashionable to mix pale Scottish brick with regular common red brick to enhance corners, pilasters, windows and cornices. These beautitul works of art are unfortunately seldom replicated in model form. They certainly take a long time to paint, but I feel the result is well worth your time, particularly when dealing with a signature building.

As a proof of concept, I used a remnant of an Atlas Middlesex Manufacturing Co. structure to replicate a common pattern that could be found on many factories in downtown Quebec City. This building has an intricate cornice typical of that era and it reminded me of the old Dominion Corset Factory still standing on Boulevard Charest.

As a proof of concept, I simply used beige paint to pick up some bricks that were previously coated with red primer. Keep in mind this isn't a real paint job, only a test to see if it would be feasible to replicate early 1900s brickwork. 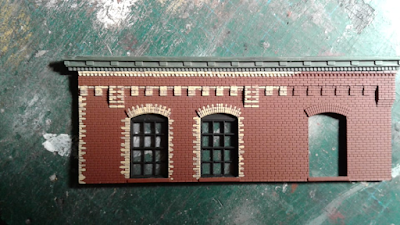 The result seems convincing to me. Sure, the habit of tool makers to punch windows without taking into account the brick pattern shows off on each sides of the windows, but otherwise, it completely transform the well-known Atlas kit.
Mind you, it's only paint... No kitbashing done at this point, no careful painting, no weathering. For the sake of realism, I also added a weathered copper-color cornice salvaged from an old Roundhosue 3-in-1 kit. It's a little bit crude and I would probably 3D print better looking cornice if needed, but it gives a good idea of what can be achieve. Don't be fooled by the results! No special skill is required there. Get yourself a good precision paint brush, thin down correctly your paint, take your time and correct your mistakes by covering them with you main brick color. You'll be surprised!

If you approach this paint job by doing a little bit each day, at the end of the week, you will end up with a fantastic structure!
Posted by Matthieu Lachance at 12:15 PM