In the « Most Pretentious Railway Name In Canada » category, the Great Northern Railway of Canada is a serious nominee. The French version of the name was even worse, giving birth to a contrived translation that was so long it covered almost an entire side of the car. On the other hand, it must be acknowledged that at that time, only a handful of railways painted their French corporate name on their rolling stock. To my knowledge, only “Chemin de fer de Colonisation de Montfort”, “Chemin de fer Québec Montréal Ottawa & Occidental” and Chemin de fer de la Baie des Ha! Ha! did so. Most lines in Quebec City area generally went by with an English name even if a good chunk of the board and customers spoke French (which to be honest, was a serious rarity). It was, in a sense, more fashionable. In France, railways generally kept their name very short and poetic instead (Paris-Orléans, Chemin de fer du Nord or Paris-Lyon-Méditerranée). 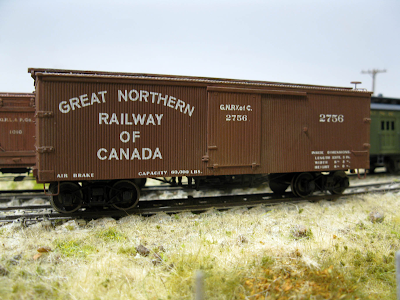 That said, the Great Northern is still remembered faintly in Limoilou where the old mainline is sometime refered to as “Le Grand Nord”. Aside that pompous name, GNRofC was a successful quick money scheme deviced by the infamous Charles N. Armstrong and John Eno, an American who fled to Canada to escape prosecution. The goal was to create a direct line between the Canadian Atlantic Railway and Quebec City to cut travelling distance by 800 miles and tap into the lucrative lumber and grain trades. Started in 1892, but fully completed in 1900, the line became highly profitable by becoming a grain pipeline between Depot Harbour and Bassin Louise in Quebec City. It was the fastest and most direct line to ship grain on the Atlantic and grain trains would depart at every 20 minutes in peak season. In 1907, C.N. Armstrong was able to sell that line to Canadian Northern who quickly made improvement with the goal of making it the backbone of it’s Eastern transcontinental line. The route was shortened by building a cutoff crossing Portneuf County between Garneau and Cap-Rouge. Had CNoR succeeded in its plan, this line would have reached Nova Scotia following a route similar to the National Transcontinental. In 1909, the Great Northern elevator in Quebec City caught fire and started a conflagration. The beautiful neoclassical Custom House was set ablaze and burned down, but was rebuilt quickly. While GNRofC and CNoR are distant souvenirs from the past, the mainline they built is now a major link between Montréal, Abitibi and Lake St. John.
Posted by Matthieu Lachance at 9:56 PM