It seems changing job means less time to post on Hedley Junction. I wish my posting could be on par with my modelling frenzy to be honest! But putting that aside, today I share more oldies: Accurail shells with custom decals. As a matter of fact, I'd like to give a shout out to William Brillinger who did a terrific job at printing the decals. Don't consider it an ad, but just a token of appreciation for the honest advices he gave me and the quality product he provided. 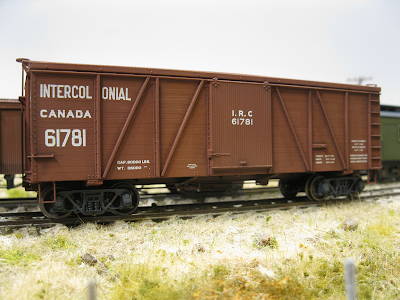 The first car is rarely modelled in HO or any other scale to be perfectly honest. The Canadian Government Railway car depicts an order of 5000 cars placed in 1917 equipped with Andrews trucks (a previous one of 1000 car having been placed in 1916). CGR was a crown corporation that managed the assets of various government owned railways and CNoR until the Canadian National was officially created. CGR placed the orders and distributed the rolling stock and locomotives according to the needs of each railway. Many of CNR large modern steamers trace their origins in these orders. 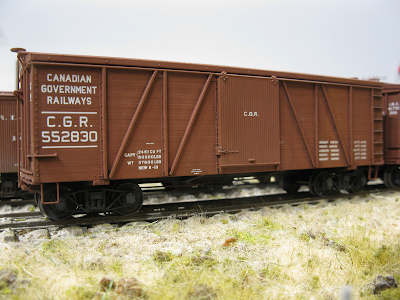 As for Intercolonial, they placed many orders between 1912 and 1914 for a total of almost 6000 cars. Being built years before the CGR ones, they rode on archbar trucks. I used Tahoe trucks which I consider a little bit pricey, but excellent in quality, very crisp, free rolling and worth every penny. They differed from the Accurail cars because they had a 5 feet door instead of a 6 feet one. Westerfield resin kits provide a more prototypical starting point for those interested in greater accuracy.

In the future, I wish to replicate a 1917 Canadian Northern Fowler car and several CPR prototypes and variants. At that point, I will have modelled almost every pre-1918 variations in Canada. If some people are aware of other Canadian railways owning Fowler cars before 1918, let me know! I've never seen a Grand Trunk Pacific Fowler car picture and would like to replicate one.

Posted by Matthieu Lachance at 6:48 PM