A Heavily Weathered Piece of History

When I was a teenager during the 90s, there used to be an old CNR boxcar stored on an abandoned spur in Limoilou, just nearby Canada Glassine plant in the vicinity of Murray Bay Subdivision junction with Limoilou yard. This boxcar paint was heavily weathered and only the maple leave's green paint was clearly visible. By luck, I found an identically weathered car on CNRphotos.com.


A few of you remember Hedley-Junction started as a mid-50s layout and evolved into an early 1980s incarnation of the same locale. Back then, I acquired a lot of cars including several Intermountain PS-1 boxcars I painted and decalled as old maple leaf CNR cars. Since Maple Leaf cars were still in revenue service in the early 80s, it's a great opportunity to bring these older cars on the layout to have some diversity.


I've decided to reproduce the car of my youth using one as astarting point. The car was painted with Krylon brown primer and lettered with a C-D-S dry transfer set. 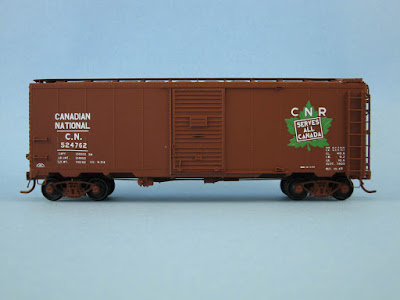 I started by masking lettering that would have been subject to patching and modification over them. Then, using a thinned down brown similar to the base coat, I overpainted the ghosting lettering found on prototype. I also erased the dots on CN reporting marks and the white line under the roadnumber. These are very old features that disappeared a long time ago. 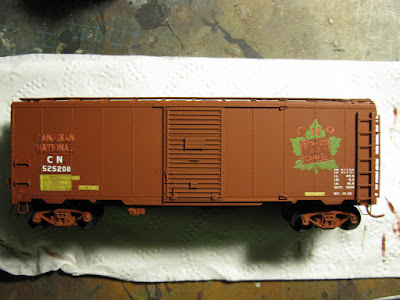 C-D-S green maple leaf color was to dark and bluish to fit a decolored 40 years old logo. I used a small brush and overpainted it with thinned down olive acrylic. At this point, I added the ACI label and everything was dullcoted. 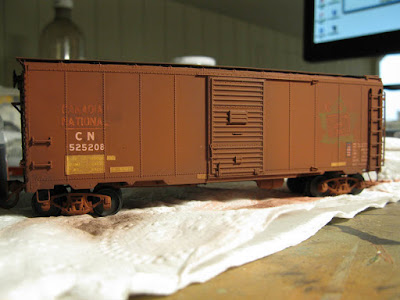 Next step, I gave the car a dark brown overspray to blend together myinterventions and give a basic coat of dirt to the car. I quickly found out the maple leaf logo was almost invisible, which wasn't the case on the prototype. 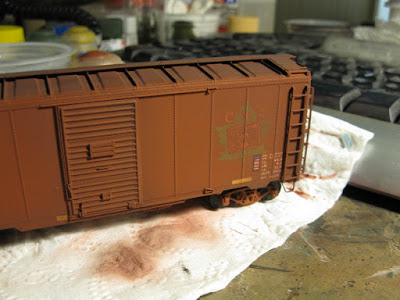 Using my trustworthy brush, I overpainted the logo again with a light yellow-olive color to make it pop up from the dirt and faded paint. This time, the color was spot on prototype. 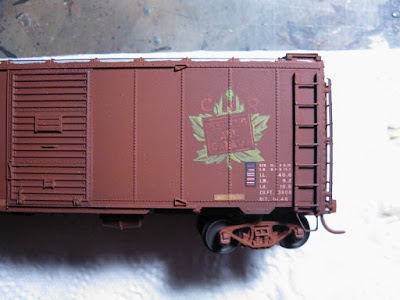 Next step, painted the roof using a mix of white and aluminium color to represent a fully peeled of roof. Roofwalk were heavily drybrushed using a greyish-light tan color to give the impression very little paint was remaining. It was now time to coat everything in a dark brown oil paint wash to bring out detail and add the final layer of dirt. Model was then dullcoted and weathering powders were used to add some texture here and there, mainly dirt splash on car ends, underbody, trucks and wheels.

The final result is self-explanatory. I'm quite happy to have worked recently on many cheap cars. It was a good way to improve myself. As the time pass by, I feel I more able to get consistent results. My early weathering efforts a few years ago were highly a matter of luck and I could never be sure of how it would turn out. And now enjoy! 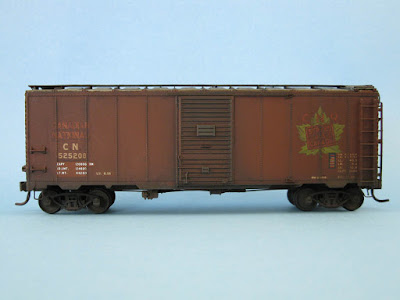 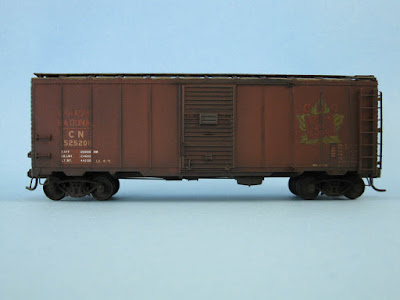 Posted by Matthieu Lachance at 12:08 PM