Another One Bites The Dust... True Line CN 8-hatch Reefer

I'm in a detailing and weathering spree though I feel I'm running out of steam, parts and decals. I've plenty of conversion projects in mind including a tentative to turn Bachmann 50ft boxcars into NSC newsprint ones. I was even thinking about rebuilding an Accurail Central Vermont wet noodle reefer but that would be a stretch for my locale and era! Nevertheless, I feel one could merge Accurail car sides with Roundhouse milk car round roof and ends. 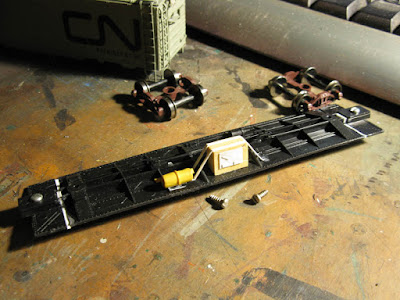 But now, I decided, just like George Dutka and Peter Mumby did a few months ago, to finally build an underframe for my wrong color-True Line spare shell. Many of you probably know the first True Line Cn wet noodle cars were wrongly painted gray instead of aluminium. TLT did replace the shell for a correct one but let the old shell with the car. It was a nice idea to get rid of useless shells that way cause now we've got a project. 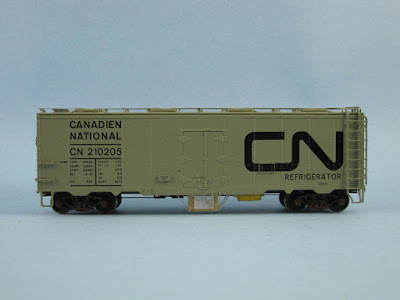 I've got several Roundhouse kit parts at home. I was quite happy to find out their 40ft underframe would fit tightly under the reefer shell without too much work. I trimmed down the underframe tab to make it less thick then spliced the car end with bits of styrene to make sure the underframe wasw long enough to fit the shell which was 2 mm longer. 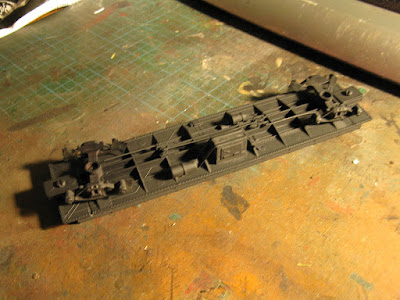 Brake details are Accurail gondola brake gear, an Athearn air reservoir from a spine car set and a resin wood box from a military detailing kit. Bits of styrene were added to bring life to the heater box. Undeframe was ready to get a coat of flat black.

Trucks are Accurail with Proto 2000 metal wheels and couplers are Kadee.

Peter Mumby weathered the car on the assumption the aluminium paint weathered badly under certain circumstances. He was quite right. The aluminium badly fade, often looking grey, even tan grey. This color is also unforgiving and makes dirt very visible. Seriously, CN reefer looked like trash to me. They have a filthy look you wish you never ate anything transported in them! 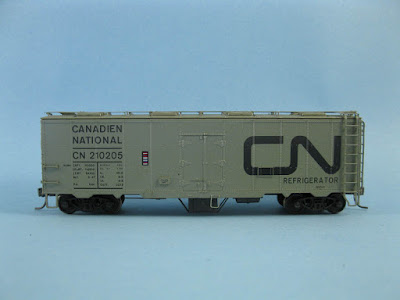 I looked at many picture and at some point, I felt whatever the paint was altered, there was still some remnant of aluminium sparkling here and there, particularly on the upper parts of the body and roof. To get this effect, I decided to airbrush a very light wash of heavily thinned aluminium paint. I generously coated the roof. Then, working to build a gradient effect, I sprayed my mix on the car ends and sides. My goal was to keep the grey paint intact near the sill and make it fade into aluminium paint near the roof. I tried to kept aluminium paint on lettering as minimal as I could be. When it was done, I sprayed a wash of tan paint near the sill to represent dirt. 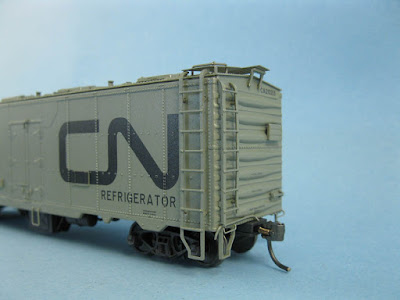 At that point, the model started to look like it was originally aluminium. The next step was easier. I made a grimy black oil paint wash and generously coated the model, letting it pool naturally under gravity. Prototype pictures show dirt pooled in specific spots and I wanted that look. Here and there, particularly hinges and rivets, I dabbed a second coat of oil paint to enhance the details. The last step was to add dirt traces on car ends and enhance some effect with weathering powders. The same powder were used to add texture to the wheels, trucks and couplers. 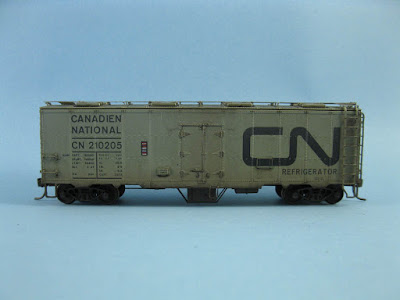 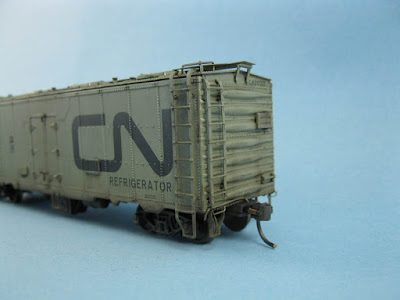 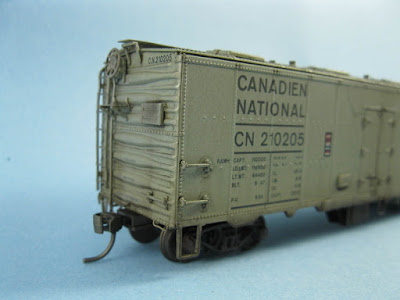 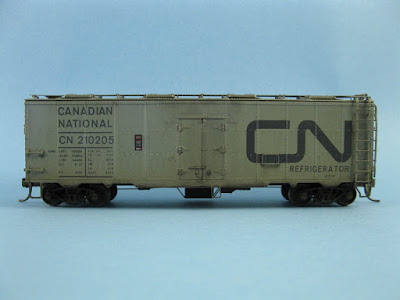 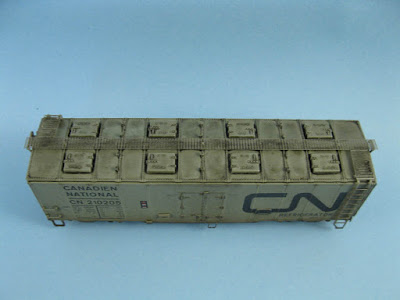 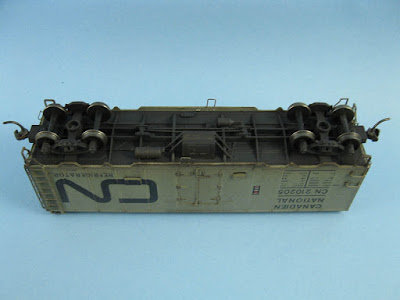 Posted by Matthieu Lachance at 12:43 PM