We recently started to roster a set of bulkhead flatcars, but like any uncovered car, they look silly during operation. 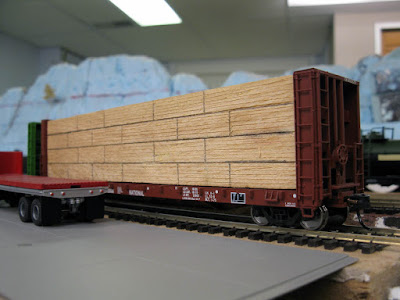 Thus, while the woodchip loads were drying, I decided to make a crude load for fun. It's far to be great, but it will be enough to make us believe the cars are loaded. 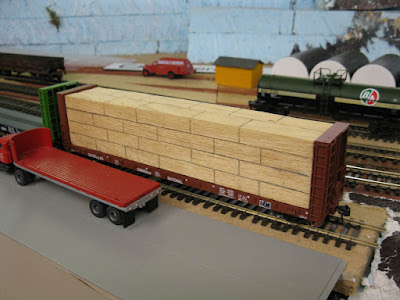 I basically started with a piece of 2" x 3" lumber cut to size. Then, I drawn pencil line to represent lumber bundles. Finally, using a ruler and a hobby knife, I scribed horizontal lines to make individual plank.

It will probably never win a modeling contest award, but at least we can move on while I'm still pondering how I'll make realistic loads later. I still can recall seeing unwrapped lumber bundles with huge Donohue's "D" logo back in the late 80s but no picture to work from. So that's another project for the future. I'm in the mood thing should go forward, even if it means going back later. Mockup are great for that.
Posted by Matthieu Lachance at 5:00 AM